What are igneous rocks? Volcanic stone

What does “igneous” mean?

Igneous means “fiery”, and igneous rocks are rocks that were made by heating them up in a fire. Usually that fire is the big fire inside the earth, under the earth’s crust. The first scientist who identified this kind of rock was ibn Sina. He lived in Iran about 1000 AD.

Sedimentary rocks
Metamorphic rocks
What is the earth made of?
More about ibn Sina
All our geology articles

Why is it hot inside the earth?

Inside the earth, radioactivity creates very high temperatures of about 1000 degrees Celsius (that’s about 1800 degrees Fahrenheit). Because it’s so hot, any rocks that are down in that core are liquids, not hard as they would be on the surface of the Earth.

What is radioactivity?
More about temperatures

How do the hot rocks get out?

But sometimes these liquid rocks shoot up to the surface when volcanoes suddenly erupt. Then tons of liquid rock rockets out of the top of the volcano and lands on the surface. When the liquid rock cools down, it solidifies into regular rocks. 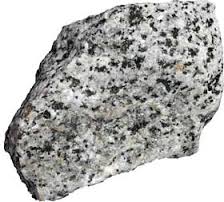 Some examples of igneous rocks

There are a lot of different kinds of igneous rock, depending on what kind of molecules are involved, and how fast the liquid rock cooled down. Some of the better-known kinds that come from volcanoes are pumice, lava, and obsidian. When lava cools, it often turns into basalt.

More about obsidian
And about basalt
What is quartz?
How does granite form?

Other igneous rocks formed slowly, deep in the earth. Some examples are quartz and granite. About a quarter of the rocks on earth are igneous rocks. Nearly all of the rest are sedimentary.