What is jade? Metamorphic rock 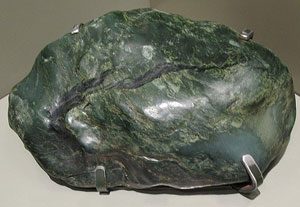 What is jade? Jade rock from Alaska

Jade is really two kinds of metamorphic rock, jadeite and nephrite, that look pretty much exactly the same. Scientists can tell them apart using chemical tests and x-rays. Like quartz, both jadeite and nephrite are chains of silicon and oxygen atoms.

Why is jade green?

Jadeite is a simpler chain and nephrite is a double chain. A trace of iron in the jade makes it look green (the same way iron makes the blood in your veins look bluish). Sometimes chromium makes the green color instead.

Where do you find jade?

Jade forms where two tectonic plates meet and there’s a lot of pressure under the earth. The pressure compresses a rock called pyroxene and transforms it into crystals of jade. There’s a lot of jade in China, and artists in China used jade to make sculptures and jewelry from the Stone Age right up to modern times. 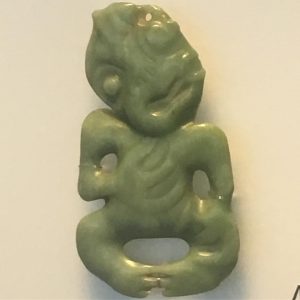 In New Zealand, where jade was also rare, Maori people used jade as a kind of sacred money, so that if you cheated someone on a deal using jade, you’d be cursed.

So what is jade? Did you find out what you wanted to know? Let us know in the comments!