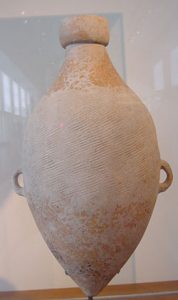 The earliest form of art we know from China was pottery – clay pitchers and bowls starting about 5000 BC. Most of the best early pottery comes from a place called Ban’po and it is named after that place.

People in China had already been making pottery for thousands of years before they started to make decorated pottery at Ban’po. This early pottery was handmade (not on a potter’s wheel). At first the polished red pots were plain. They were probably polished to make them easier to clean, so the dirt wouldn’t stick to them.

Pottery bowl from Henan in northern China, about 3500 BC (Musee Guimet, Paris)

But by about 3500 BC, Chinese artists at Ban’po were beginning to make more artistic pottery. They painted clay pots with black swirling spirals and geometric shapes, and sometimes with human faces. 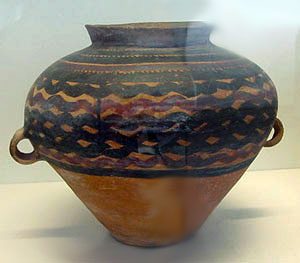 Pottery jar from Gansu in northwest China, about 2500 BC (Musee Guimet, Paris)

Later on, artists in China used a brush to paint their pottery, and the designs became more sophisticated.

Learn by doing: draw a pot on a piece of paper and decorate it with black paint using geometric shapes and spirals.
Go on to Shang Dynasty Chinese Art

More about the Stone Age in China

Bibliography and further reading about Chinese art in the Stone Age: