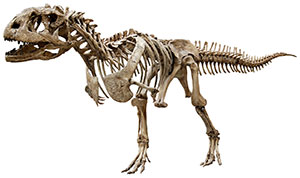 Evolution of skeletons: Skeleton of a dinosaur

From frogs, there evolved reptiles like crocodiles and dinosaurs. Some of these reptiles lived mostly or entirely on land, so they needed stronger bones that could hold them up when they weren’t in the water. And most reptiles ate meat, so, like fish, they needed teeth. Some reptiles evolved the ability to fly. They needed light, hollow bones that wouldn’t make them too heavy to fly.

From the smaller kinds of dinosaurs, birds evolved. Birds had hollow bones like the flying dinosaurs. Other reptiles evolved into mammals. Mammals didn’t need hollow bones, but they needed to hear better, and they evolved fish jawbones into special ear bones.

Different kinds of mammals developed specialized bones for different things. People evolved narrow pelvises so we could walk upright. That let us run faster, but it makes it harder to have babies. We lost our tails. Men also evolved stronger face bones to protect us when other people punched us in the face.

Bones aren’t just for holding you up, though. Inside your bones, in the bone marrow, you make the red blood cells that carry oxygen all over your body. Bone marrow also makes most of your white blood cells, to fight off bacteria and viruses. Bone marrow also makes most of your platelets, which form clots to stop bleeding when you get a bruise or a cut. When something goes wrong with your bone marrow, you get leukemia: blood cancer.