What are roundworms? Nematodes, evolution, and biology 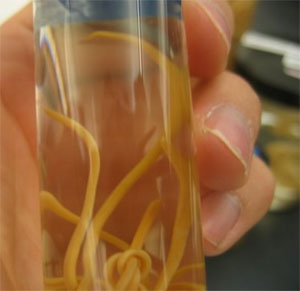 Roundworms, or nematodes, probably evolved from the earlier flatworms about 548 million years ago. Like all other living things at this time, roundworms lived in the ocean.

Roundworms were the first kind of animal that was big enough so that some of its cells were not touching the ocean water. To keep the cells that weren’t touching the water supplied with oxygen and food, roundworms developed the beginnings of a circulatory system.

Tens of thousands of kinds

After several million years, some of the roundworms probably evolved into segmented worms about 545 million years ago. But there are still tens of thousands of different kinds of roundworms in the world. Roundworms are very common all over the world (but not as common as arthropods). 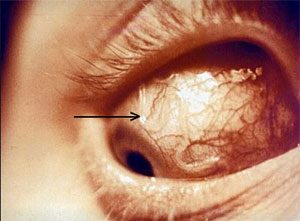 A roundworm inside a person’s eye

Where do roundworms live?

Most roundworms still live in the ocean. But some roundworms have evolved to live on land, and many other roundworms now live inside people, other animals, and even plants.

According to the World Health Organization, about one in every four people on Earth has roundworms living inside them (and it’s mainly people in North America and Europe). You get roundworms inside you by eating dirt or sand where dogs have been pooping, so little kids who eat dirt are often the ones who get roundworms.

Bibliography and further reading about roundworms: