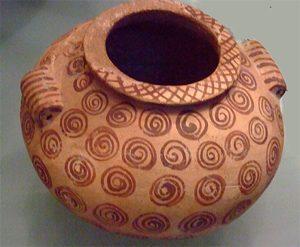 When did Egyptian pottery get started?

People in Egypt started to make pottery about 4000 BC, ten thousand years later than people further east in Japan and China. Maybe they used their first pots to ferment fish in, as Chinese people did.

History of pottery
What is clay?
Stone Age Egypt
All our Egypt articles
All our Africa articles

Or maybe people started to make clay pots in order to have something to keep wheat and barley in so it wouldn’t get wet and go moldy.

How did Egyptians make pots?

The earliest Egyptian pottery has geometric designs on it. Potters built these early pots by hand, making long snakes of clay and spiraling them around to build the walls of the pot. These spirals are also reflected on the decoration of the pots. The spirals on the pot above, from Naqada, may represent the afterlife. 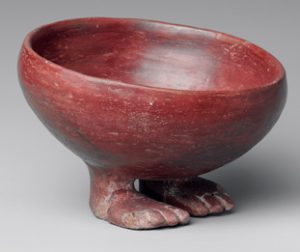 Predynastic Egyptian pot with feet(ca. 3750 BC) –  Egyptian pottery in the Metropolitan Museum of Art

People all over the world – even people who didn’t know each other at all – have always thought of pots as being like people in their shape. The part the pot stands on is the foot, the main part is the body, the part where the pot curves in is the shoulder, the narrow part near the top is the neck, and the very edge is the lip. But some early potters took this idea more literally than later potters. I just love this one with feet!

Egyptian pottery in the Bronze Age

By about 3500 BC, Egyptian pottery has designs on it that are very much like the designs on earlier rock carvings. They show people, boats, and animals, and they look enough like later Egyptian painting that we can see they’re related to each other artistically. 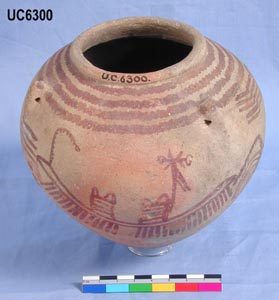 By this time, Egyptian potters started to use a pottery wheel to make pots. That was faster, so you could make more money selling pots. With a pottery wheel, a good potter can make a pot in just a few seconds. Most of these potters were probably enslaved.