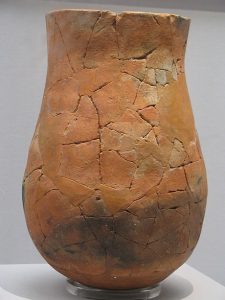 The first modern people, and their dogs, probably reached Korea about 40,000 BC. Some of them came east across Central Asia from the Caspian Sea. Probably others came north from China.

They settled down in Korea together, fishing and gathering shellfish to eat. They hunted whales, too. Like Stone Age people in China and Japan, they stored their fish in baskets and fermented them to preserve them. By 10,000 BC these neighbors showed them how to make pottery jars to ferment fish and vegetables in.

About 3500 BC, Korea entered the Neolithic, or Late Stone Age. Now Koreans started farming. They grew millet and rice, like their neighbors in China. But they kept on eating a lot of fish and seafood, too.

Where does millet come from?
What is rice?
History of fishing

The first state kingdom in Korea was Gojoseon. It may have been founded by, or influenced by, traveling Yamnaya or Indo-European people, who brought bronze to Korea maybe as early as 2000 BC, when they were also showing Chinese Shang Dynasty people how to use bronze. Korean stories place this about 2300 BC.

What is bronze?
Who are the Yamnaya?
China’s Shang Dynasty

Their stories recall magical strangers arriving and turning the local animals into civilized people. Possibly more strangers, this time riding horses, arrived from the north-west in the 700s BC, when they also came to China. At this point, Koreans also started to use a lot more bronze.

Chinese written histories start mentioning Korea and Gojoseon soon after 700 BC, during the Spring and Autumn period of the Eastern Zhou Dynasty. By the 400s BC, the Silk Road opened up and Chinese ships started to sail to Japan. That pulled Korea into a larger international trade network.

But as Korea’s neighbors got stronger, they tried to force Korea to become part of China or Japan. In 108 BC, the Chinese Han Dynasty‘s army invaded Korea’s Gojoseon kingdom. The Chinese built four fortified cities and left soldiers there to keep control of Korea, the way the Greeks and Romans built colonies in their empires about the same time.

Gojoseon collapsed into a bunch of smaller kingdoms. The Koreans pushed out three of these colonies a generation or so later, but the fourth one – Lelang – kept going as a trade center until after the Han Dynasty collapsed.

By this time, three new Korean kingdoms formed. Goguryeo controlled the north. Baekje and Silla controlled what is now South Korea. In 313 AD, Goguryeo took advantage of China’s weakness to get control of the old Chinese colony at Lelang. Then Gorguryeo got stronger and stronger, taking over a big part of what’s now Russian Siberia and Chinese Manchuria (north of Korea). In the early 400s, Gwanggaeto and his son Jangsu took over most of the south, too, uniting Korea for the first time. 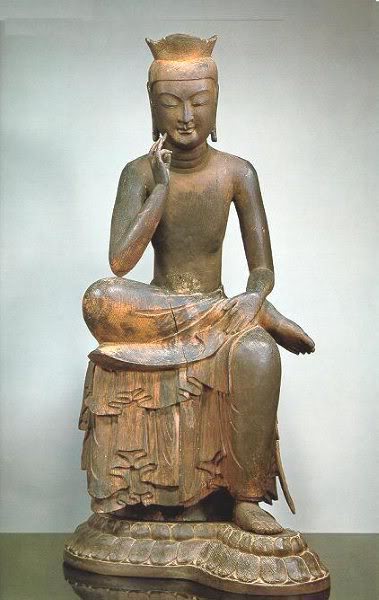 History of Korea: A statue of the Buddha thinking, from Silla (in Korea, about 900 AD)

Between 598 and 614 AD, the Chinese Sui Dynasty emperor Yangdi led huge armies to try to conquer Korea from Goguryeo. The Goguryeo army drove Yangdi off, but soon after that Goguryeo also got weaker.

Some Korean administrators got out and moved to Japan, where they helped Japan start its government. One of the Goruryeo army generals, Dae Jo-yeong, started his own northern kingdom centered on Manchuria, called Balhae.

Silla and the T’ang  Dynasty

The Korean kingdom of Silla made an alliance with the Chinese T’ang Dynasty and conquered Baekje. Then in 668 AD  they conquered Goguryeo. That united all of Korea, now from the south instead of from the north. Silla pushed out the Japanese colony in Korea.

Taika period Japan
T’ang Dynasty China
Who were the Inuit?
Where is Vietnam?

Silla was a very rich kingdom, trading all up and down the Pacific coast, from the Inuit in the north to Vietnam and Indonesia in the south. They started to produce silk, like China, and sold it. Like their neighbors in China, many Koreans converted to Buddhism about this time.

Chinese Buddhism
Where does silk come from?
History of folding fans

Then they sent Buddhist missionaries to get people in Japan to become Buddhists too. In the 900s AD, Korean ambassadors from Silla brought the first folding fans as a gift to the Song emperor. 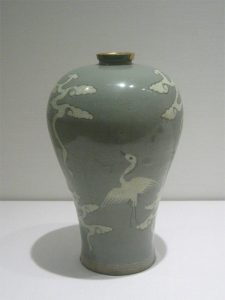 History of Korea: Celadon pottery from Korea (about 1000 AD)

But in the late 900s, Silla collapsed. And the Khitan, coming from further west, conquered Balhae. South Korea’s weakness left an opening for the northerners again. They welcomed refugees from Balhae and rebuilt their power as the Goryeo kingdom.

Who were the Khitan?
And the Jurchen?
And the Mongols?

That’s where we get our word Korea. The new Goryeo kingdom’s capital was in Kaesong. They fought off the Jurchen, and then the Khitan and the Mongols, but they couldn’t get Manchuria back.

Iron and steel
History of gold
Why did China need horses?

Like the earlier Silla, Goryeo soon became a big player in international trade in the northern Pacific Ocean. Korean traders sold beautiful celadon pottery to the Song Dynasty in China. They sold iron, and gold, and horses. The Goryeo rulers wrote law codes and hired a lot of administrators to work for the government.

In the 1100s, they opened universities all over Korea to teach these administrators. Scholars used woodcut blocks to print Buddhist religious books, and then, in the 1200s, they invented the world’s first movable metal type. 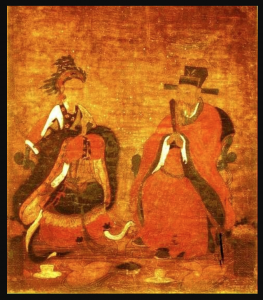 The Mongols in Korea

By the 1200s, Korea fell under the control of the Mongols. Kublai Khan‘s daughter married a Goryeo prince. Other marriages also tied Korea to the Yuan Dynasty – the Mongols – in China. Then in the 1300s came the Black Death – the bubonic plague. The Mongol Empire collapsed. Thousands of Koreans died too.

Kublai Khan and the Mongols
What’s the Black Death?
Where does cotton come from?
Redistribution of land

But after the plague, the Goryeo King Gongmin declared Korea’s independence. Even though he was married to a Mongol princess, Gongmin broke free of Mongol influence. He fired all the pro-Mongol government officials. He even started to grow cotton in Korea. Like earlier reformers in Japan, Gongmin tried to redistribute land, but his government officials refused to do it, because they owned a lot of land themselves.

Korean traders once again sailed to Japan and China, north to the Inuit, and south to Indonesia and Thailand. Korea was rich from all this trading in the 1400s, 1500s, and 1600s. Once again there were many Korean universities. Everything was peaceful and good, at least if you were pretty rich.

But in 1592 and 1597, Japan invaded Korea and tried to take it over. The Japanese army was using their new guns, which they had learned about from European traders. At first, the Koreans were surprised and overwhelmed, but soon they fought back and forced the Japanese out of their country.

Guns and gunpowder
Who were the Manchu?
Qing Dynasty China
European trade in the 1700s

That didn’t solve their problems, though, because only a few years later, in the 1600s, the Manchu came from the west and defeated Korea on their way to taking over China. The Joseon dynasty kept on ruling, but now under the control of Qing Dynasty (Manchu) China.

Things went on peacefully but Korea couldn’t compete with European trading ships. Slowly Korea stopped trading with the rest of the world. Without international trade, Korea became poorer and poorer. The great universities closed. By the 1800s, Korea had become a poor country.

History of Korea: Japanese soldiers land in Korea to invade (1875)

Japanese troops shot thousands of Koreans at protests. They forced millions of Koreans to do bad or dangerous jobs, or to fight in the Japanese army. The Japanese also destroyed many important Korean buildings, and took a lot of Korean art back to museums in Japan.

After World War II, since Japan lost the war, they also lost control of Korea. But in 1948 the United States and Russia could not agree on who would control Korea. So they split Korea into two parts. Russia got North Korea and the United States got South Korea. Two years later, North Korea invaded South Korea, starting the Korean War. But after years of fighting, neither side won.

Today, Korea is still split in half. South Korea, as a democracy with the help of the United States, has become one of the richest countries in the world. North Korea is still very poor. To make things worse, since 2006 they have been cut off from international trade by United Nations rules. Like Goguryeo 1400 years ago, North Korea thinks more armies and fighting will make them better off. Like Silla, South Korea relies more on international trade and cooperation.

Did you find out what you wanted to know about the history of Korea? Let us know in the comments!

Bibliography and further reading about the history of Korea: