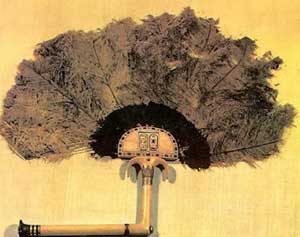 When did people start to use fans?

Chimpanzees use a stick with leaves on it, or just a big leaf, to chase away flies. They can’t cool themselves by creating a breeze, because their hair insulates them.

Primates and humans
Flies and mosquitoes
History of clothing

But the earliest people who had evolved hairless skin probably quickly started to use big leaves and leafy sticks as fans in hot weather. They waved fans around to move the air and create a breeze to cool themselves off – and also to get rid of flies. 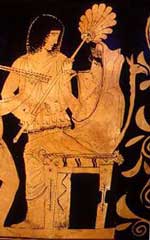 A slave fans Hera with a peacock feather fan (Athens, 430 BC) Now in Toledo.

By 3000 BC (if not earlier), people were making fancier fans. The earliest ones come from Kerma, in Bronze Age Sudan. In ancient Egypt, about 1300 BC, the pharaoh Tutankhamon was buried with eight fans. Some of these fans were long sticks that other people carried for him, to fan him with. 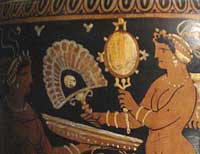 Others were small hand fans, made out of gold and other precious materials, together with ostrich feathers.

Fans spread to Asia and Europe

Assyrian kings had this kind of fan, and Persian kings and Chinese emperors, at least by the Han Dynasty, had circular fans made from peacock feathers, or from woven reeds. Ordinary Chinese people made their fans out of goose feathers. By the 400s BC, traders were selling peacock feather fans to Greece.

Who were the Assyrians?
When is the Han Dynasty? 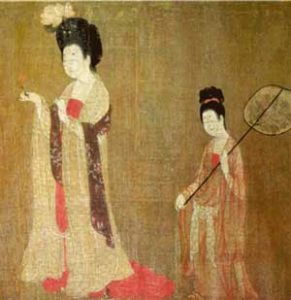 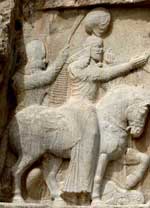 Fans in the Americas

Who were the Maya?
And the Arawak?

But people kept inventing and selling new kinds of fans. By the 100s AD in China (or earlier), according to the Shuowen Jiezi, people had big wooden fans hanging from the ceiling. Servants pulled ropes to fan the room. By this time, Greek and Chinese people also used flat, circular fans made of linen or  silk, with ivory handles, or of hemp, with bamboo handles. These fans often had fancy writing or painting on them. By the 500s AD, Chinese traders brought these flat circular hemp fans to Japan. 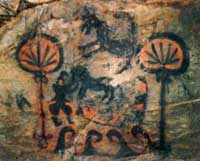 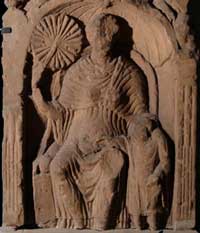 About the same time that flat, circular fans appeared in China, the first pleated, circular fans, probably made from parchment, showed up at the other end of Eurasia. In the Roman Empire, Roman women were using circular fans as far north as Britain.

People kept on using these circular, pleated fans in Europe after the fall of Rome and throughout the Middle Ages. They carried them in Catholic church ceremonies, and also used them at home to keep cool. (They kept on using the older feather fans too: in the 500s AD, Syrian churches used peacock feather fans.) 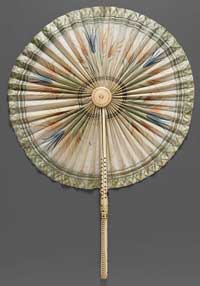 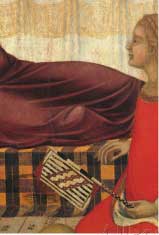 Meanwhile, in West Asia and India, people kept on using square, flat fans woven from straw or reeds. Some people in Europe used them too, at least starting in the 1100s. But there were still peacock feather fans, and pleated circular fans, in Europe in the late Middle Ages.

The earliest known folding fan comes from Nara City, Japan, from 747 AD. The fan is made of strips of wood fastened together at one end by a metal rivet and at the other end by a string so they can fan out. 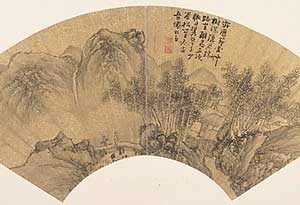 Later, artists added paper and silk covers to these folding fans, and they painted them as they had with the old circular fans. The very hip Chinese poet Xue Tao, writing about 800 AD, seems to know about folding fans. By the 900s AD, Korean ambassadors brought fancy folding fans as gifts to Song Dynasty emperors in China. 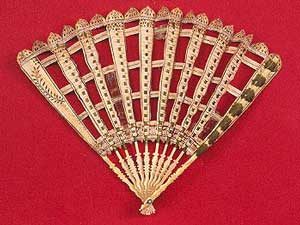 Folding fans didn’t really take off in China until the early 1400s AD, when the Yongle Emperor began to give folding fans as gifts to his followers. Soon Chinese artists began to paint paper and silk fans

So when the first European traders reached China, in 1513 AD, folding fans were still super hip in China. Europeans traded their silver and sweet potatoes for lots of these new painted fans – light, pretty, and not too breakable.

The first folding fans, with their Chinese paintings, reached Europe in the late 1500s, where people like Queen Elizabeth had their pictures painted carrying them, and English craftspeople soon started making their own fans. Both Chinese and European men and women also used fans to hit their daughters and servants when they were angry!

Link to a presentation on fans:

How fans move around Eurasia

Learn by doing: fold paper into a fan; draw pictures on your fan.
More about medieval Japan