History of Baskets – Who invented baskets? 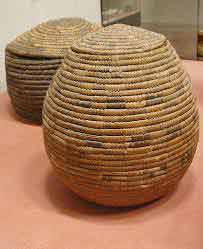 History of baskets: Baskets from ancient Egypt (now in the Louvre)

Chimpanzees don’t weave baskets. But people probably learned how to make baskets very early on, soon after they became people. It was probably before the first people left Africa. The earliest known baskets were made about 27,000 BC in eastern Europe. But people probably made baskets much earlier. They just don’t last very well, because they rot. 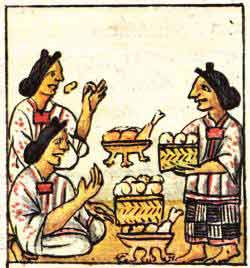 What were baskets used for?

Baskets are cheap and easy to make, and useful for gathering food, carrying things, and storing things, so everybody wove baskets, all over the world.

People used baskets as backpacks, as baby carriers, as cupboards, as plates and cups, as cradles, as birdcages, as measuring cups and as sandals, and to catch fish.

You can make baskets waterproof to hold water, and you can boil water in them by dropping in hot stones from the fire. You can weave a light wagon out of basketry.

Baskets and the invention of pottery 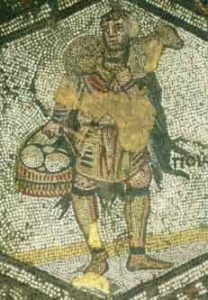 Roman mosaic of a man with baskets (Istanbul, ca. 500 AD)

People also used related techniques to weave straw mats to sit on and sleep on, and straw rugs for their floors. They wove straw hats to keep the sun off their heads, and they knotted nets to catch fish and small animals and birds. They made straw shoes and sandals, too. Soon this kind of weaving led to finer weaving which made linen and hemp and cotton clothing and blankets.

History of straw
When did weaving get started?
History of linen
Where does cotton come from?

Cheap and easy to make 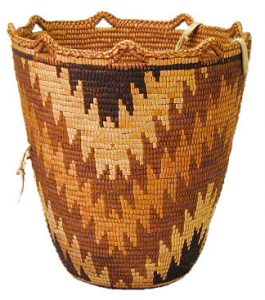 But even after the invention of cloth, people kept right on using woven baskets and straw or reed mats for a lot of their stuff. Plenty of free material – reeds and tall grasses and straw – was available all over the planet.

And anybody could learn to make baskets and mats, even if specialists made better ones. Baskets and mats didn’t take long to make, they were useful in thousands of different ways, and they could be made to be beautiful, too.

We might want to think more about the shape of a basket when you are first starting to make it – a circle, divided into segments by the ribs. Did women think of this circle as a representation of the cosmos, and relate the segments to the months of the year? Did the Mesopotamian system of counting in 12s derive from basket-making as well as from astronomy?

Bibliography and further reading about basketry: