Who was Enheduanna? Akkadian literature 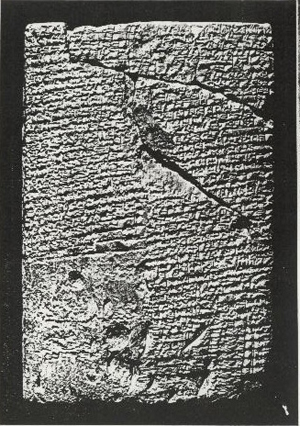 Enheduanna wrote this poem – this is a later copy of it, in cuneiform on a clay tablet

Was Enheduanna her name?

Nobody knows Enheduanna’s real name, if she had one. “Enheduanna” means “High Priestess, Ornament of the god An”, but that’s what people called her. Enheduanna’s father was King Sargon of Akkad, and her mother was Queen Tashlultum.

What did Enheduanna do?

Enheduanna herself must have been born about 2285 BC. When she grew up, Enheduanna wrote poems. She’s the earliest writer in the world whom we can identify as an individual.

Bronze Age timeline
Women in Mesopotamia
What is an empire?

When Enheduanna’s father, Sargon, conquered the Sumerian cities south of Akkad, he sent his daughter there to be High Priestess in the city of Ur as a way of showing the Sumerians that he cared about them, and that he wanted to have one united empire.

About this time, Enheduanna began to write poetry. She wrote many hymns to the gods. She also collected these poems like a book, which as she says “no one had created before.”

The goddess Inanna
The god Enlil

Here are some lines from one of Enheduanna’s poems about the goddess Inanna:

Enheduanna in a procession (she’s the one in the fancy dress). Enheduanna and her assistants are making a sacrifice at a ziggurat.

At her loud cries, the gods of the Land become scared. Her roaring makes the Anuna gods tremble like a solitary reed. At her rumbling, they hide all together. Without Inana great An makes no decisions, and Enlil determines no destinies. Who opposes the mistress who raises her head and is supreme over the mountains? Wherever she [some words missing], cities become ruin mounds and haunted places, and shrines become waste land. When her wrath makes people tremble, the burning sensation and the distress she causes are like an ulu demon ensnaring a man.

She stirs confusion and chaos against those who are disobedient to her, speeding carnage and inciting the devastating flood, clothed in terrifying radiance. It is her game to speed conflict and battle, untiring, strapping on her sandals.”

What happened to Enheduanna?

After Sargon died and Enheduanna’s brother Rimush became King of Akkad, Enheduanna continued on as High Priestess. At some point, according to the poem she wrote about her experience, she was thrown out of power, and then she got her position back.

Possibly she was still High Priestess at 31 years old when her nephew, Naram-Sin, became king of Akkad in 2254 BC. Enheduanna probably died about 2250 BC, when she was about 37 years old.

More about women in West Asia
More about the Akkadians

Bibliography and further reading about Enheduanna: