What is a ziggurat? Mesopotamian architecture

Remains of the ziggurat at Warka, in Iraq, 3000 BC (before it was reconstructed)

Like the Egyptians at the same time, Bronze Age Sumerians and Iranians around 3000-2500 BC devoted a lot of energy to building big buildings. But unlike the Pyramids, which are tombs for dead Pharaohs, the Sumerian and Iranian ziggurats (ZIG-oo-rats) are temples for their gods.

Ziggurats were built out of mud-brick

Because good building stone is hard to find in the river valley of the Euphrates River where the Sumerians lived, the Sumerians mostly did not build in stone. Instead, they built their ziggurats (and also their houses and city walls) out of mud-brick, or adobe. 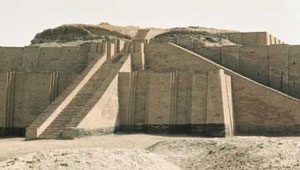 The ziggurat at Warka (reconstructed by Saddam Hussein)

Mesopotamian ziggurats are very high buildings. You start by making a big flat platform of mud-brick, and then you make a slightly smaller platform on top of the first one, and another on top of that, until the platform is just a little bigger than a temple, and then you build the temple at the very top, like a sand-castle. Maybe Mesopotamian people thought it was better to pray to the gods from as close as possible, and so if the gods lived up in the sky you had to build great platforms to get near them.

Of course it isn’t very hard to build a very impressive building this way: it is solid all the way through, like a sand-castle, so it is easy to get it to stay up. 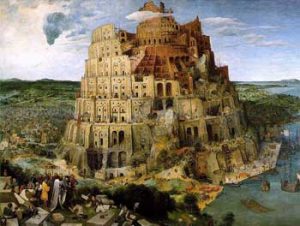 Breughel’s medieval painting of the Tower of Babel (He didn’t realize that ziggurats were mostly solid.)

The tower of Babel was a ziggurat

The Jews thought it was a very bad idea to try to reach all the way up to God like that, and their hatred of the Mesopotamian ziggurats is reflected in the story of the Tower of Babel. In that story, people tried to build a ziggurat that would reach all the way up to Heaven. But God didn’t like that, and he destroyed the ziggurat and scattered the people so they couldn’t try it again. He made them all speak different languages.

When did people stop building ziggurats?

The Sumerians and their descendants continued to build ziggurats well into the Middle Bronze Age (the Third Dynasty of Ur), around 2000 BC, long after the Egyptians had stopped building pyramids.

Did you find out what you wanted to know about Mesopotamian ziggurats? Let us know in the comments!

Bibliography and further reading about ziggurats:

The Sumerians, by Elaine Landau (1997). Easy reading. Despite the bad Amazon rating, this is a good solid introduction to the Sumerians, with an explanation of prehistory at the beginning for context. Pictures of ancient stuff, and good maps.