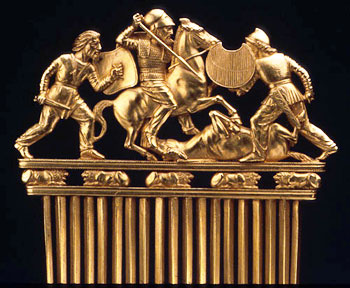 Most early Central Asian people were Indo-European, or Yamnaya. The biggest group may have been the Scythians. Until about 500 BC, the Scythians lived in large tribes or clans ruled by chiefs.

Like the Egyptians and the West Asians, the Scythians buried their chiefs under big mounds of earth. Scythian chiefs were buried with their weapons, their horses and chariots, animal sacrifices, and possibly human sacrifices. We don’t know for sure whether any of these chiefs were women, but there are big tombs with armed Scythian women in them. This may be the basis of the Greek stories about Amazons.

The Sogdians, living further east, were also Indo-Europeans. More of the Sogdians lived in towns or city-states, but they had chiefs like the Scythians. These chiefs were sometimes more or less under the control of a king based at Samarkand.

About 500 BC, Cyrus the Great formed the world’s first big empire just south of the Scythians and Sogdians in West Asia. When the Scythians invaded the Persian Empire, the Persian king Darius led expeditions deep into Scythian territory, all the way north to the Volga river. Contacts with the Persians encouraged the Scythians to try to organize their own empire under King Ateas about 400 BC. But their efforts collapsed about 300 BC with Sarmatian and Celtic invasions.

After about 300 AD, the Turkic and Mongol people started gradually taking over Central Asia. Like the earlier Scythians and Sogdians, the Mongols had a government made up of a bunch of tribes or clans, whose chiefs sometimes worked together under a king. The Mongol chiefs met together from time to time in a council called a huruldai to elect a king.

After the chiefs elected Genghis Khan in 1206 AD, he began to restructure the Mongol Empire to be more like a state, probably modelling his ideas on the government of China, to his south. Genghis Khan chose his government officials by merit – how good they were at their job – instead of by family or by how rich they were. And he put out a new law code, where the same laws applied to everyone in the empire.

Most of the khans and government officials were men, but not all. For several years, from 1241 to 1246 AD, Queen Toregene ruled the Mongol Empire, and other women also participated in Mongol government. This state lasted as long as the Mongol Empire did, but when the Mongol Empire collapsed about 1350 AD due to the bubonic plague, people in Central Asia went back to living in smaller chiefdoms.

When the Mongol Empire collapsed, Poland and Russia also became free to form their own governments. Poland became a monarchy where kings usually left the throne to their sons, but women like Queens Elizabeth and Jadwiga ruled when they had no brothers. In Russia, the rulers called themselves Czars, after the Roman word Caesar. Here, too, both men and women ruled.