Year of the four emperors – History of Rome

With the end of the family of Augustus, some people thought that Rome might go back to being a real Republic again. But nobody really remembered how to do that, and anyway they were too afraid of civil wars. But they got civil wars anyway, for the next year. Nero killed himself in 68 AD with the governor of Spain, Galba, marching on Rome.

The Roman emperor Galba, first of the four emperors of 69 AD

Once Nero was dead, Galba made himself emperor. But almost immediately, in January 69 AD, the governor of Upper Germany (Northern Germany) also rebelled, and marched on Rome. His name was Vitellius. At about the same time, one of Galba’s supporters, Otho, turned on him and killed him.

The Roman emperor Otho, the second of the four emperors of 69 AD

The Roman emperor Vitellius, the third of the four emperors of 69 AD

All three of these emperors had come from the West, and by this time the army in the East, in West Asia, was starting to feel that they should have an emperor who would pay more attention to them. They were fighting to put down the First Jewish Revolt. 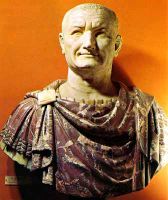 Vespasian, the last of the four emperors of 69 AD – and the one who lived.

So they chose their own general, Vespasian, to be emperor. In the fall of 69 AD, one of Vespasian’s friends fought Vitellius, and Vitellius was killed, so Vespasian became emperor. Four emperors in one year! People were really afraid the old civil war time was coming back again. So they were glad to settle down with Vespasian as emperor.

Bibliography and further reading about the year of the four emperors:

The Year of the Four Emperors, by Kenneth Wellesley (3rd edition 2000).