What did people wear in northern Europe? 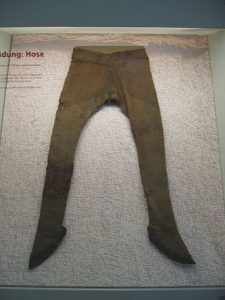 A pair of pants (braccae) from Germany from the 400s AD

German clothing was like the clothing of Central Asia in that German men, and often women, wore pants under their tunics to keep them warm. This was different from the clothing of the Mediterranean and West Asia, where men and women both only wore tunics with nothing underneath. Both the Germans and the Romans thought of this as an important difference between them. 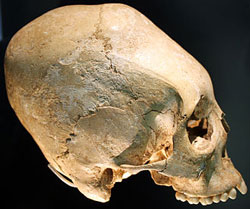 Skull of a person from northern Europe, ca. 500 AD (now in Landesmuseum Württemberg). Their skull has been shaped.

Many German people also gave their children long heads by intentionally shaping their skulls when they were babies. Like the Chinook (and other people) they felt that a long, high forehead was a good look. 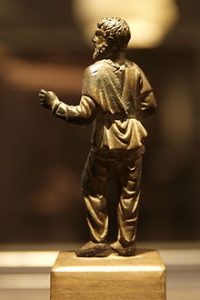 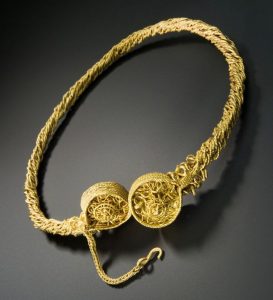 Men and women in Northern Europe also wore heavy gold jewelry, like the Scythians in Central Asia. They weren’t using money, and wearing heavy gold jewelry gave people a convenient way to carry their wealth around, and also show people exactly how rich they were.

Learn by doing: spinning project
Or: learn to braid hair!
More about clothing in medieval Europe

Bibliography and further reading about the history of European clothing: