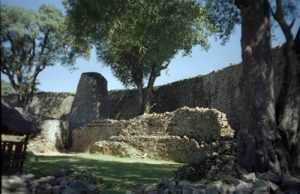 Besides South Africa, central Africa is the most isolated part of Africa. For many years, the people who lived here saw almost nobody from outside their own area. So it took longer for people in Central Africa to find out about new inventions.

But even so, some historians think that people were smelting iron in the Great Lakes area (modern Uganda and Rwanda) by around 500 BC, even earlier than iron technology reached West Africa.

History of iron
Early African history
All our Africa articles

By about 800 AD, the people of central Africa who lived along the Limpopo River, in modern Zimbabwe, started to keep sheep and cattle.

Sheep history
Where do cattle come from?

Neither sheep nor cattle are native to Zimbabwe, so these people probably got the sheep and cattle from Bantu people living to their north. Maybe around the same time, people in Zimbabwe, the Karanga or the Shona, also began speaking a Bantu language.

What did Central African people buy and sell?

Gold and gold mining
What is ivory?
Ancient Indian economy

In return, they got lots of glass beads, probably from India, and also cotton cloth, steel knives, and probably Indian medicine. Possibly the Medieval Warming period improved the climate in a way that made Zimbabwe richer than before.

Just after 1000 AD, these people in Zimbabwe began to build the first big stone palaces ever seen in central Africa. The most famous of these palaces, which were called zimbabwes, is called Great Zimbabwe, and it was built around 1250 AD. Musicians living in the Zambezi valley invented the mbira, a new musical instrument.

By 1450, however, there was less trade with East Africa than there had been before, and Great Zimbabwe began to be abandoned.

Climate change may again have played a part, as the Little Ice Age made south Africa cooler than before. And possibly people were dying of the Black Death – the bubonic plague. Nyatsimba Mutota started a new kingdom, Mutapa, a little further north, covering what is now northern Zimbabwe. He kept selling ivory and added copper and salt.

What is the Little Ice Age?
More about the Black Death

The next ruler, Matope Nyanhehwe Nebedza, then expanded toward the coast, to control the seaports, so that by 1480 AD he ruled most of Mozambique too.

The Forest People, by Colin M. Turnbull (1960s, republished 1987) (this is not a kids’ book, but it is a great account of life in the African rain forest).