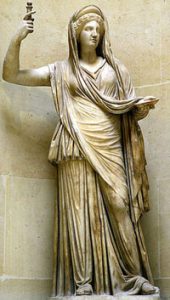 Juno was Jupiter’s wife and sister for the Romans, the way Hera was Zeus‘s wife for the Greeks. Because the Romans and the Greeks were both descended from Central Asian Indo-Europeans, Hera and Juno probably started out as the same gods.

Who was Jupiter?
More about Hera
Who were the Indo-Europeans?
Roman religion
All our ancient Rome articles

But the Romans thought of Juno a little differently from Hera. Juno was mainly a goddess of marriage, like Hera. But Juno also protected towns and villages. Many towns in Italy had temples to Juno in order to get her protection. To the Romans,  Juno was sometimes a war goddess, ready to fight to protect the towns.

A Roman temple from the forum in Ostia, near Rome. Probably devoted to the three gods: Jupiter, Juno, and Minerva.

The Romans often thought of Juno as part of a group of three gods: Jupiter, Juno, and Minerva. They seem to have gotten this idea from the Etruscans. Many Etruscan and Roman temples were dedicated to all three of these gods together. There was a big temple like that on the Capitoline Hill in Rome, overlooking the Roman Forum.

Who was Minerva?
Who were the Etruscans?
What was the Roman Forum?

Where are the stories about Juno?

The Greek god Hera was a character in many Greek myths, like the story of Hercules or the story of Alcmena. But the Romans didn’t think of their gods as being so much like people, and didn’t tell stories about them as much (at least, until after they conquered Greece).