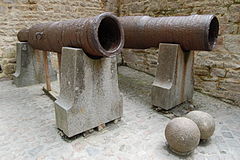 Not long before 1500 AD, everything medieval soldiers did in wars suddenly changed. First, Europeans learned how to make and use gunpowder from Central Asian scientists, and they put gunpowder into metal cannons. Once you had cannons, you could blow holes in thick castle walls and in soldiers’ armor, and there was just no point to thick walls and metal armor anymore.

Second, around 1500 AD European rulers began to hire and pay armies themselves, out of tax money, instead of using the feudal system to force their lords to find soldiers and bring them to the war. European armies became more professional, better armed and better trained. 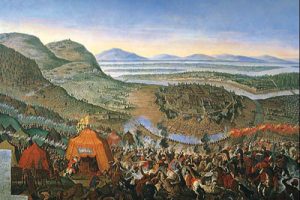 In the 1600s warfare shifted from land to the oceans, as the countries of Europe fought over who would capture which parts of North and South America, India, and China. Elizabeth’s England had the strongest navy, but there were many sea battles especially between England and Spain. On land, soldiers began to use guns instead of swords, and to wear matching cloth uniforms. Their better training paid off: when the Ottomans attacked Vienna in 1683, the Austro-Hungarian Empire defeated them. At sea, also, the Ottomans, the Safavids, and the Mughals were all unable to defend their shipping lanes.

But in the 1800s, Europeans didn’t spend so much time fighting each other. European armies mostly fought in other parts of the world, conquering Africa, Southeast Asia, and Australia, and forcing China to accept European trade. European armies won practically all of their battles, and they began to think that war was a pretty fun and easy game. 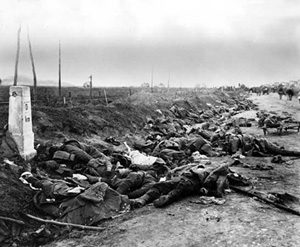 Europe was so much weakened that they had to stop conquering the rest of the world, and lost most of their African, Asian, and American colonies. Since 1945, Europe has been regrouping and building up wealth again, not fighting wars, or at least not fighting wars against other Europeans.