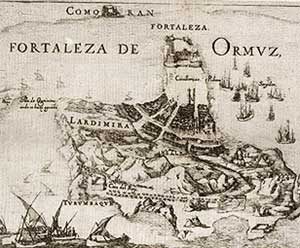 Safavid Iran: the Battle of Hormuz

Abbas, the Shah of Iran, after conquering most of what is now Iraq from the Ottomans, turned east again and took Kandahar (now in southern Afghanistan) from Nur Jahan of the Mughal Empire in 1622.

Who was Nur Jahan?
Ottomans and Sofia Baffo
Queen Elizabeth in Britain
Early Safavids
All our West Asia articles

As part of the same campaign, Abbas also – in an alliance with Queen Elizabeth of Britain – pushed the Portuguese out of Bahrain and the port of Hormuz. (Nur Jahan was also pushing the Portuguese out of India at the same time.) Taking Kandahar and Baghdad gave Abbas control of the profitable Silk Road trade, and pushing out the Portuguese helped stop them from taking over the Silk Road’s business. Abbas became very wealthy, and built a beautiful new capital city at Isfahan to show it.

When Abbas died in 1629, he was 58 years old. Abbas’ grandson Safi became the new Shah, but he was only 17 years old. Like James I of England a few years earlier, Safi never held power, and instead his vizier, the eunuch Saru Taqi, held power. Saru Taqi did a pretty good job, but the the Ottoman ruler Kosem Sultan recaptured Baghdad in 1638.

Who was Shah Jahan?

In the same year, Shah Jahan recaptured Kandahar for the Mughal Empire. The loss of both Baghdad and Kandahar meant the loss of control over the Silk Road. The next year, Kosem Sultan and Saru Taqi made a peace treaty that ended the fighting, but the Ottomans kept Baghdad. 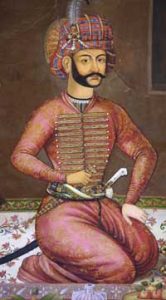 When Safi died in 1642, his son Abbas II became the Shah of Iran. Abbas II was only ten years old, and for a while Saru Taqi kept power, ruling together with Abbas II’s mother, Anna Khanum (just as Anne of Austria and Mazarin ruled France).

By the time Abbas II was about fifteen, though, both his mother and Saru Taqi were dead, and Abbas II ruled for himself. He reconquered Kandahar from Shah Jahan in 1649, and this time the Iranians kept it. For the rest of Abbas II’s rule Iran was rich and peaceful, until Abbas II died in 1666, when he was only 34 years old.

Abbas’ son Suleiman, who was 19 years old, took over next. Suleiman, like his grandfather Safi, never got any real power, and his vizier Sheikh Ali Khan Zangeneh ruled for him, just as the cardinal Mazarin had for Louis XIV in France a few years earlier. Like Mazarin, Sheikh Ali Khan raised taxes, but he could not challenge the newly professionalized British army and the French under Louis XIV on the seas, and the Silk Road lost more and more trade to ocean-going ships and to European factories. So Iran got poorer.

Who was Mazarin?
Louis XIV and France
Cromwell and Britain
Colonization timeline

Suleiman died in 1694, when he was 47, and his oldest son Husayn (then 26) inherited the name of Shah, while Suleiman’s aunt, Abbas II’s sister Maryam Begum ruled through him. But Maryam couldn’t fight British power either. As people realized how weak the Safavid army was, they began to revolt and try to get their independence. Kandahar broke away in 1709.

By the 1700s AD, with the rise of Russia, the Safavids found themselves squeezed from the north as well as from east and west. They lost territory on all sides as the Ottomans took over Iraq, Afghanistan became independent, and the Mughals took Pakistan. In 1736, an army general, Nader Khan, took over from the last Safavid sultan, the baby Abbas III, and created the country of Iran.

Bibliography and further reading about the Safavids: