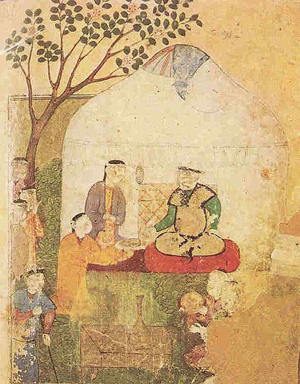 Uzbek ruler in his yurt (1509, probably at Samarkand, in Uzbekistan)

After the collapse of the Mongol Timur’s empire in the 1400s AD, many smaller states replaced the one big empire of the Middle Ages. One of the most powerful was the Uzbek empire of Bukhara, north of the Caspian Sea. The Uzbeks were Turkic speakers and Muslims.

Who was Timur?
Islamic religion
All our Central Asia articles

By 1500, the Uzbek Empire included the powerful Silk Road cities of Tashkent, Bukhara, Samarkand, Kabul, and Herat. The Uzbeks suffered many attacks by Babur, the Sultan of the Mughal Empire in India, but they successfully fought him off.

More about the Mughals
The Safavids
And the Silk Road

But a major defeat followed this victory, when in 1510 the Uzbeks lost the city of Herat and the Persian province of Khurasan to their Safavid neighbors.

The Uzbeks and the Safavids kept on fighting over Khurasan through the rest of the 1500s AD, and Khurasan changed hands many more times. Whenever the Safavids were busy fighting the Ottomans or the Mughals, the Uzbeks would take advantage of that to attack them. In 1740, the Safavid ruler Nadir Shah conquered the Uzbeks. But when Nadir Shah died seven years later, the Uzbeks got back their independence. 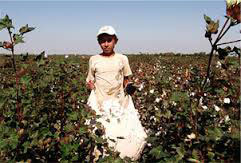 The Russian czars forced farmers to plant cotton on most of the farmland in Uzbekistan. Planting so much cotton caused water shortages and a lot of pollution.

Uzbekistan remained part of the Russian Empire until 1991, when the Russian Empire’s weakness allowed Uzbekistan to regain its independence. Today Uzbekistan no longer includes Herat or Kabul (which are in Afghanistan), but it still holds Samarkand, Bukhara, and Tashkent. And Uzbek children still pick cotton under terrible conditions.

More fights over cotton: the Uighurs and China

Bibliography and further reading about the Uzbeks: