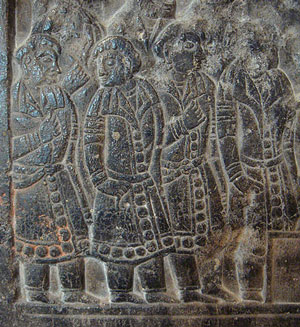 Even after the fall of the Han Dynasty, the Sogdians still controlled Silk Road trade between West Asia and China.

The Sogdians and India

Sogdian trade stopped for a while about 425 AD when the White Huns conquered the Sogdians, but by 557 AD the Sogdians were once again independent and went right back to trading. In the 600s AD, the Chinese Buddhist pilgrim Xuanzang went to Sogdiana and described the Sogdians as great traders.

The spread of Buddhism
Who was Xuanzang?
The White Huns

Islam and the Sogdians

After the Arabs conquered the Sassanian Empire in the late 600s AD the Sogdians gradually became more and more Persian and started to speak Persian instead of Sogdian (but the two languages are pretty closely related).

What is Islam?
End of the Sassanian Empire
The Abbasid Empire

T’ang Dynasty China
An Lushan in China
The Uighurs

The T’ang Emperor Suzong, Hsuan Tsung’s son, hired the Uighurs as mercenaries to put down An Lushan’s rebellion. In 757 An Lushan was killed, and from then on the Uighurs were China’s main mercenaries. Suzong didn’t hire any more Sogdians!

The Sogdians had to look elsewhere for support. Although the Sogdians were still traders, they gradually got more and more involved with the Abbasid Empire. The Abbasid caliphs helped the Sogdians to fight off Tibetan attacks from the east.

Slowly many Sogdians converted to Islam. By 819 AD the descendants of the Sogdians became known as the Samanid Empire.

Bibliography and further reading about the Sogdians: