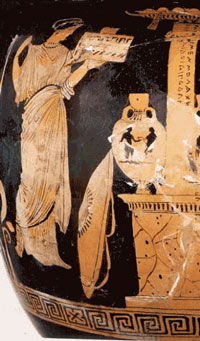 Antigone at her brother’s grave, from the Louvre (Paris)

Antigone is a play that Sophocles wrote. He was an Athenian, who lived in the 400s BC.  The play tells the story of Antigone, the daughter of Oedipus.

Who was Oedipus?
More about Sophocles
More Greek literature
All our Ancient Greece articles

It takes place in Thebes, a traditional enemy of Athens. People in Athens especially hated Thebes when Sophocles wrote this play in 441 BC, because Thebes took the side of the Persians in the Second Persian War, in 480 BC. The play won first prize in the competition.

Here’s the story. When Oedipus was married to his own mother, Jocasta, they had four children – two sons, Polyneices (polly-NICE-ees) and Eteocles, and two daughters, Antigone (ann-TIG-oh-nee) and Ismene (iss-MAIN-eh). The children were cursed by their father’s curse and so nothing good could happen to them.

After Oedipus died, his two sons were supposed to rule Thebes together, but because of the curse, they fought over who would be in charge. They had a big war, and Polyneices and his brother killed each other in the battle. So neither of them could be king, because they were both dead. The people chose Creon (CREE-on) for their new king. Creon had been on the side of Eteocles.

Creon ordered that Eteocles should be brought into the city and buried like a hero, with a big funeral. But he ordered the people to leave Polynices outside the city, unburied, like a traitor, and the dogs would eat his body.

More about the Greek underworld
History of dogs 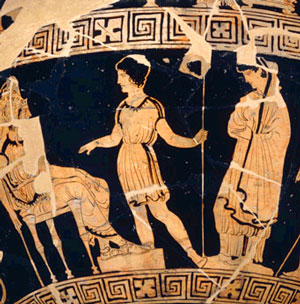 Polynices’ sister Antigone was very upset by this order. She wanted her brother to be buried right! So early the next morning, Antigone sneaked out of the city and buried Polynices with her bare hands.

When Antigone got back, her sister Ismene tried to convince her to lie about it, but Antigone said no, that would be wrong.

When Creon found out that Antigone had buried Polynices, he was very angry. And he was even more angry when she said she wasn’t sorry at all.

Creon’s son, Haemon, was in love with Antigone, and he tried to save her. When he couldn’t save her, he hanged himself, so he would be dead like her.

What do you think? Was Antigone right, or Creon? Should you obey the law, even if you think it is wrong? Even if God says that law is wrong? Is it ever right to break the law?

Bibliography and further reading about Greek plays and Antigone:

Readings on Antigone, also by Don Nardo (1999). For teenagers. A collection of different interpretations of the play, edited for younger readers. Rave reviews.