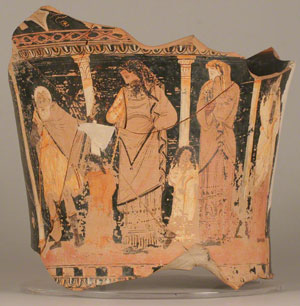 Oedipus Rex: The shepherd tells his story to Oedipus, while Jocasta listens in horror (now in the Getty Museum)

Sophocles wrote this very famous play in the 400s BC. It is mainly about fate, and how men do not control their own fate, no matter how much they try. It’s about accepting that there are things that are beyond your control.

This is the story:

When Laius (LIE-us) and Jocasta, the king and queen of Thebes, had a baby, Laius went to the oracle at Delphi (DELL-fee) to ask about it. But the oracle told Laius that his son would murder him. Horrified, Laius ordered that his baby son should be exposed in the woods with a pin through his feet to keep him from crawling away. And a shepherd did this.

Why is his name Oedipus?

But the baby was rescued and taken to the king and queen of Corinth, who wanted a son and couldn’t have one, and the king of Corinth adopted the baby. The queen of Corinth called the baby Oedipus, which means swollen foot, on account of the pin through his feet. But she didn’t tell Oedipus that he was adopted.

Oedipus visits the oracle at Delphi

When Oedipus grew up, he also visited the oracle at Delphi, and the oracle told him that he would kill his father and marry his mother. Naturally Oedipus was horrified. He ran away from Corinth that night, trying to escape his fate. 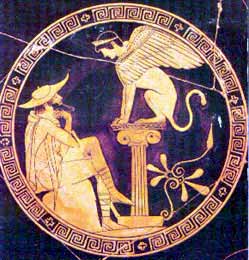 As Oedipus travelled down the road in his chariot, with his horses, he came to a crossroads. An older man driving a chariot came to the crossroads at the same time, but he went through without letting Oedipus go. Oedipus was angry at this and got out and killed the other man.

Oedipus and the riddle of the Sphinx

When Oedipus got to the town of Thebes, a little later, he found the great Sphinx there. The Sphinx sat in front of Thebes and asked everyone who came there a riddle. If you could answer it, the Sphinx let you go. But if you could not answer the riddle, then the Sphinx ate you. Nobody ever knew the answer. This was the Sphinx’s riddle:

What goes on four feet in the morning, two feet at noon, and three feet in the evening? (Click here for the answer).

When Oedipus answered the riddle correctly, the Sphinx was so upset that she killed herself. Oedipus went on into Thebes. When he got there, the Thebans were very upset because somebody had killed their king, Laius. But they were happy to hear that Oedipus had figured out the riddle of the Sphinx. So they made Oedipus their new king. As part of becoming the new king, Oedipus married the queen, Jocasta.

Plague strikes the city of Thebes

Many years went by. Oedipus and Jocasta had four children, two boys and two girls, and they got old. But one day a plague came to Thebes. All over Thebes, people were dying of the plague. King Oedipus sent a messenger to the oracle at Delphi to find out why the gods had sent this terrible plague. The oracle told the messenger that Thebes had a bad man in it, and they had to find him and get rid of him or the plague would go on killing people.

This video shows the first scene of the play

Oedipus figures out the bad news

This is where Sophocles began his play. In the play, Oedipus tries to find out who this bad man might be, and with the help of the blind seer Tiresias he gradually realizes that he himself, Oedipus, is the bad man, because he has killed his father (the man at the crossroads) and married his mother, just as the oracle said he would. When he finds out that even though he tried hard to escape his fate it has found him anyway, he is very upset. He pokes out his own eyes with a stick. And when Jocasta hears the news, she hangs herself until she is dead. Finally, Oedipus leaves Thebes with his children, so that the gods will take the plague away, and wanders off toward Athens.

Did you find out what you wanted to know about Oedipus Rex? Let us know in the comments!