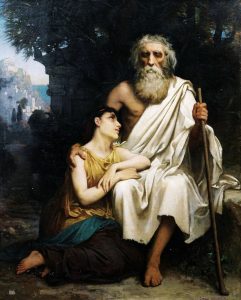 A later painting of Antigone and Oedipus, by Camille Felix Bellanger, in the 1800s.

Oedipus at Colonus is a play written by Sophocles. It tells the story of what happened to Oedipus after he left Thebes.

Oedipus is old now, and he’s blind, because he pulled out his own eyes. His daughter (and sister) Antigone is leading him around the countryside, looking for someplace that will let Oedipus stay there.

But nobody wants to let a bad-luck guy like Oedipus live in their town. Everyone makes fun of him and tells him to move on.

Finally Oedipus comes to Athens. King Theseus is there; the young Theseus who killed the Minotaur, but now he is very old, and he has lost his own son to a tragedy. The people of Athens want to make Oedipus leave, but Theseus feels sorry for Oedipus, and says that he can stay in Athens.

The main question of this play is, who is right? Is Oedipus really bad luck? Should Theseus make him leave? Or is it good to be kind to people who are down on their luck, even Oedipus? Does it matter that Oedipus didn’t mean to do anything bad?

This is also a play about being old, and blind, and what that does to someone who used to be young and healthy and strong (and most of us start out young and strong and end up old and sick).

Learn by doing: visit some people who are old and sick, perhaps in a nursing home
More of this story – Antigone