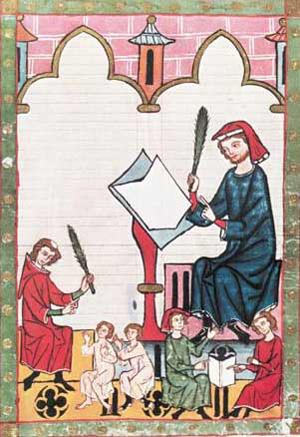 Just like the Clerk’s Tale: Clerks in the Manessa Codex (1300 AD)

A story from Boccaccio

Chaucer‘s Clerk’s Tale is actually taken from one of Boccaccio‘s stories, and because of that the story’s action happens in Italy.

Who was Boccaccio?
Who was Chaucer?
More medieval literature
All our medieval Europe articles

What’s the Clerk’s Tale about?

It shows the young monk‘s ideas about how women ought to behave. The story is about Griselda, a poor woman who marries a rich man.

Walter is an abusive jerk

Her husband, Walter, wants to make sure Griselda will love him unconditionally – no matter what he does to her. To test her, Walter sends a servant to take away her baby daughter, and pretends to kill the baby. (He claims that the people don’t like the baby because its mother is from a poor family). Even though Griselda is miserable without her baby, she says that she knows if her husband did it, it must be right.

A few years later, Griselda has a baby boy. She’s very happy, and she loves the baby very much. But again, her husband tests her. Walter sends a servant to take the baby away, and he tells her that he has killed the baby. Still Griselda says she knows he will always make the right decisions for their family.

Walter gets even worse

Years go by, and finally Walter thinks of one last test. He tells Griselda that he is going to have their marriage annulled by the Pope (so it will be as if their marriage never existed). He even forges a parchment with a seal on it to make it look official. Walter tells Griselda that he’s going to marry another woman, and he wants her to plan the wedding and get everything ready. Griselda, never losing her confidence in Walter, obediently makes all the plans, invites the guests, and prepares the wedding feast.

Secretly, Walter orders the servants to send the two children back from Bologna, where they have been hidden. Walter pretends that their daughter (who is twelve years old by now) is the girl he’s going to marry. Griselda’s fine with that, too. But finally Walter tells her the whole story, and praises her for being so loyal to him, and they live happily ever after, with their children.

Who made up this awful story?

Chaucer got this story from Boccaccio; before that, its origins are unknown. You might compare it to the Buddhist Vessantara Jataka, or to the Jewish story of Job. In some ways it is like the West Asian story of Gilgamesh, or the Greek story of Pandora, which tells what happens when you don’t obey the gods.

(For totally different views of medieval women, check out the other stories here.)