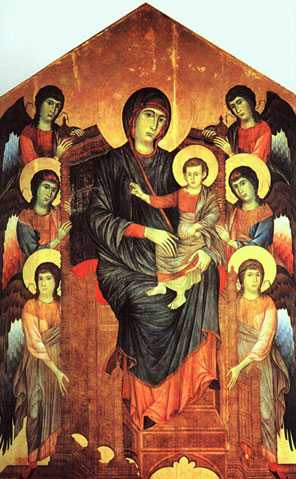 The painter Cimabue’s Madonna and Jesus, in Louvre Museum, Paris

The painter Cimabue (really Cenno di Pepe, but people call him Cimabue) was born in Florence, Italy, around 1240 AD, in the Middle Ages.

More about Florence
Medieval art
All our Middle Ages articles

Cimabue (chee-MA-boo-ay) worked in and around Florence his whole life. He worked on the mosaics decorating the inside of the baptistery and the cathedral in Florence.

What’s a mosaic?
Make your own mosaic
Florence’s baptistery
And the cathedral 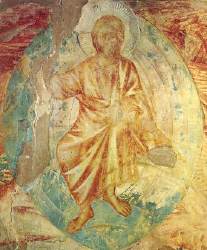 Fresco of Jesus, from the church of St. Francis in Assisi.

Around 1278 AD, Cimabue also did some fresco painting on the walls of the church of Saint Francis at Assisi, south of Florence.

What is a fresco?
Make your own fresco
Francis of Assisi

The old style of painting

When Cimabue was learning to paint in the 1260s AD, Italian painters were still copying the style of Byzantine art.

Byzantine art – and early Italian art – always had gold backgrounds and showed saints and angels and Jesus and Mary in very formal, stiff positions, to show how important these figures were, and that they were not like real people. They were flat, with very little effort to show their muscles or the shadows that would make them look real. 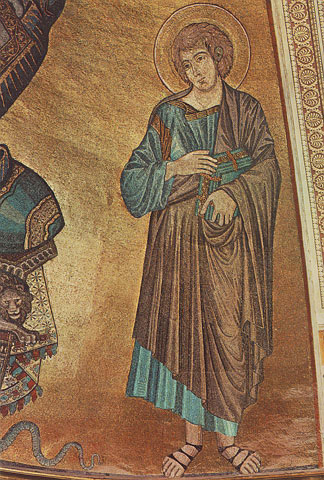 Mosaic of St. John from the cathedral of Florence

Cimabue always painted more or less in this Byzantine style. His paintings have gold backgrounds, and the people are very formal and stiff.

But he did these paintings in a new, Italian style, where the people look more like real people. Cimabue did use shadows, and he did show muscles.

When did Cimabue die?

Cimabue died in Florence around 1302 AD, when he was about sixty years old.