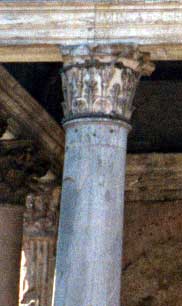 A Corinthian column capital (from the Pantheon in Rome)

A new type of architecture

By 400 BC, Greek architects had added a third type of column to the old Doric and Ionic styles. People called the new style the Corinthian column, after the city of Corinth.

The Greeks never actually used the Corinthian column that much, even in Corinth. But the Romans, who liked fancier buildings, used it a lot.

The Corinthian style is fancier and heavier than the Ionic style. In Corinthian temples, the columns have a fancier base to stand on. At the top of the columns, on the capital, there’s a stone carving of acanthus leaves, under the architrave (ARR-kuh-trayv).

What is a frieze?
What are triglyphs and metopes?

On the architrave, as in Ionic temples, there is a continuous frieze where the triglyphs and metopes would be on a Doric temple. 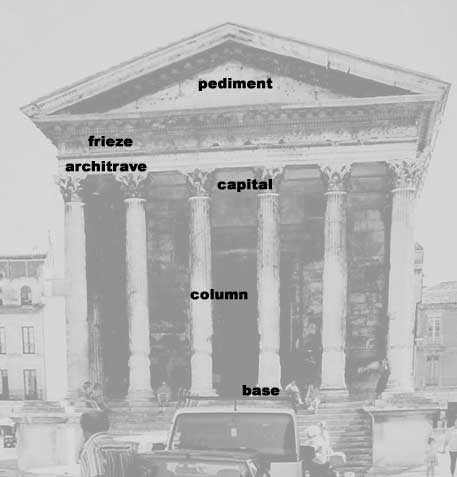 Roman temple in the Corinthian style, at Nimes in southern France.

One example of a Corinthian temple is the Pantheon. Another is the Temple of Castor in the Roman forum, and a third is this temple at Nimes, across the Alps in France.

The Pantheon in Rome
The Temple of Castor