What is on the Parthenon frieze?

On the Parthenon’s frieze, Pheidias carved a long procession of Athenians, with girls in the front, bringing a new dress for the goddess Athena to her temple.

What is a frieze?
The Parthenon
Classical Greek architecture
Athens in the Classical period
All our ancient Greece articles

A scene from the Parthenon frieze: bringing the new dress for the goddess

A new style of carving

Most of the carving was done in a beautiful new style, where all the figures moved very gracefully, and the clothes were floating and very thin, almost transparent, so that you could see all the muscles and tendons of the women wearing them.

Horses and their riders 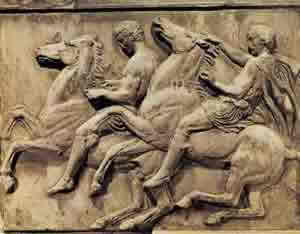 Another part of the Parthenon frieze showed the rich young men of Athens riding their horses. The horses are excited to be in a parade, and the young men are trying to keep them under control.

This gave Phidias a chance to show off how well he could show the movements of the horses and the men.

The idea of keeping horses under control emphasizes the battle of order over chaos, just like on the metopes.

Learn by doing: build a model of the Parthenon in Lego or on Minecraft
The Parthenon blows up!

Take our quiz – how much do you know about the Parthenon?
The Parthenon blows up!
Quatr.us home