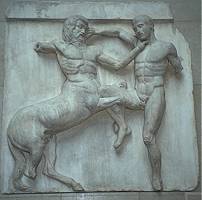 On the metopes, just under the roof, Phidias carved the battle between Lapiths (men) and centaurs (the Centauromachy), Greeks against Amazons (Amazonomachy), the gods against the giants (the Gigantomachy) and the sack of Troy.

Metope from the Parthenon: Lapith and Centaur

All these stories show the greatness of the Greeks and of men and civilization in general, and how men and gods are able to beat anybody who fights them: giants, centaurs, Trojans, or women (Amazons are women). 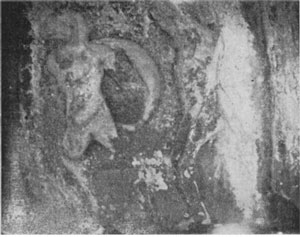 All of these giants and the rest represent the forces of chaos, or nature, or barbarians – which were all the same to Greek men. They themselves represented order, law, and civilization, and everything else – including women – was chaos.