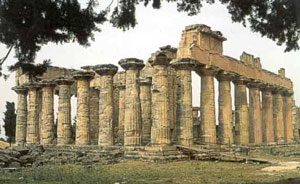 Greek architects weren’t just copying their old wooden temples for the fun of it though, or just because they couldn’t think of any better ideas. There was a lot of thought behind each little decision.

For one thing, these are religious buildings, so they have to please the gods. The Greeks didn’t want to make too many changes in case the gods didn’t like it.
For another, the Greeks wanted their temples to express their ideas about how the world should work. They believed that men should create order out of chaos, and that this would make the gods happy. So one reason for building a temple is to create order out of chaos. You take jumbled up stones and make them into something beautiful and orderly, with a rhythm to it like music. 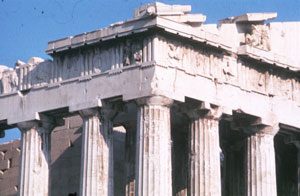 You can see a Greek temple as a kind of picture of music. Think of the columns as setting the beat : dum, dum, dum, like drums (and the flutes make a little riff on that). Then up above the columns are the triglyphs and metopes. There are always twice as many triglyphs as there are columns, so they beat a faster beat, and they are smaller so they set a lighter tone: bim-bim, bim-bim, bim-bim.

Above that is the pediment, the triangle. The pediment has complicated sculptures inside it, and you can see it as the melody, with swirls and patterns, telling a story.
At the same time, the way the temple gets more complex as you go up tends to draw your eyes upward to the sky, where the gods live, reminding you that this is a sacred place.

Learn by doing: build a Greek temple out of Lego or in Minecraft
More about Classical Greek Architecture