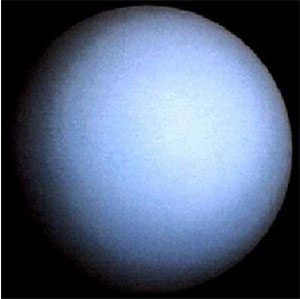 Uranus, the second to last planet out from the Sun

Uranus is between Saturn and Neptune, so it’s the next to the last planet away from our Sun. It takes Uranus 84 years to go around the Sun because it is so far away. Like the other planets going around our Sun, Uranus (YER-ann-uss) formed about 4.5 billion years ago.

Uranus is much smaller than Jupiter or Saturn, just a little bigger than Neptune (but that’s still 15 times bigger than the Earth!). Uranus tilts differently from the other planets – instead of the Equator being the part that’s nearest to the Sun, Uranus points first its North Pole and then its South Pole at the Sun as it goes around. Probably Uranus got knocked out of whack by something big that ran into it while the planets were just forming.

Because Uranus is so far from the Sun, it’s very cold there (-371 Fahrenheit or -224 Celsius). The planet has a rocky center, but the outer layer is probably mostly made of ice, frozen ammonia, and frozen methane. The atmosphere is mainly hydrogen and helium, like Jupiter and Saturn, and like them very windy. Uranus is always covered in clouds – some water clouds like ours, and some methane clouds. And it must always be pretty dark, because the sunlight there is only 1/400th as strong as it is on Earth.

You can see Uranus from Earth without a telescope, but it’s very dim. Nobody realized Uranus was a planet until William Herschel saw it with a telescope in 1781. But the astronomers named Uranus after a Greek god anyway – Ouranos. You can see the moons and rings of Uranus with a telescope. Nobody from Earth has ever been to Uranus, but we sent some robot rockets to fly near it and take pictures and send back information about how cold it was and things like that.