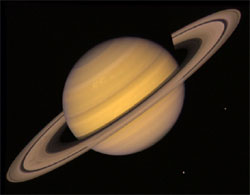 Saturn, as seen from space

After Jupiter, Saturn is the next farthest planet out from our Sun. In some ways, Saturn is a lot like Jupiter – it’s very cold, and it’s mostly made of an ocean of hydrogen molecules, with some helium and a little bit of other things. Like Jupiter and the other planets around our Sun, Saturn (SAA-tern) probably formed about 4.5 billion years ago. It takes Saturn about 29.5 of our years to go once around the Sun.

Saturn’s rings make it easy to tell apart from the other planets. The rings are mostly made of ice, with some dust mixed in. These rings might be the remains of moons that got blown up or fell apart. In addition to the rings, Saturn also has more than sixty moons. Saturn’s biggest moon, Titan, is bigger than the planet Mercury (but smaller than Jupiter’s moon Ganymede). It’s the only moon in our solar system that has a significant atmosphere. One funny thing about Saturn is that on Saturn the North and South poles are the warmest places on the planet – sometimes as warm as negative 122 degrees Celsius! (That’s still very very cold.)

If you went to Saturn, you wouldn’t find anything to stand on, because the surface is all a sort of ocean of liquid hydrogen. Plus, there’s a good chance that it rains drops of ammonia there, and there are very fast winds there all the time (faster than a hurricane on Earth). And there are fierce lightning storms. You might have better luck surviving on Saturn’s moon, Titan.

Learn by doing: try to find Saturn in the sky
More about Neptune
More about planets