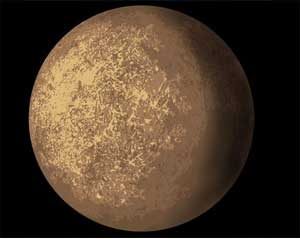 Which planet is Mercury?

Mercury is the closest planet to our Sun. At some parts of its orbit, Mercury is only about 46 million kilometers away from the sun.

The Roman god Mercury
What about Venus?
More about the planets
And about the Sun
History of astronomy
All our space articles
All our physics articles

Because Mercury is so close to the sun, it is very hot there. It is so hot that all the carbon dioxide and oxygen has boiled away, and Mercury has very little air. On Mercury, it’s so hot that even some metals like tin melt into liquids, as if they were water. It’s about 427 degrees Celsius – more than four times as hot as boiling water. Like the Earth, Mercury’s center is mostly made of iron, with a layer of silica rocks on top of that. 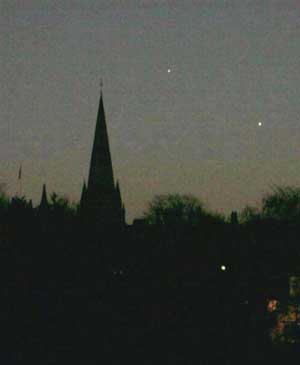 Venus and Mercury at dawn – Mercury is the one higher up

Can I see the planet Mercury?

Mercury is a small planet. It is only about one-third the size of Earth. Mercury never gets closer than about 77.3 million kilometers from Earth. Even though it is so small and far away, you can see it from Earth without using a telescope, if you look just at sunset or sunrise.

When was Mercury discovered?

How long is a year on Mercury?

Because Mercury is so close to the Sun, it doesn’t take very long to go around the Sun. It goes around once every 88 days, so a year on Mercury is only about three months long.

More about Earth’s seasons
A science project about seasons

Has anyone from Earth ever been to Mercury?

Nobody from Earth has ever been to Mercury, but in 1975 we did send a spaceship there, which took pictures and sent them back to us. Another spaceship reached Mercury in 2011, and sent better pictures back.