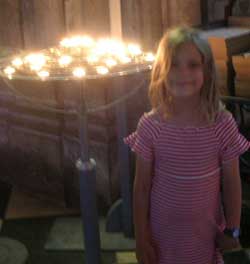 You can do experiments to show that you need oxygen for a fire to burn. Light a candle, and when it is burning well, put a glass jar (like a jelly jar) over the candle. It will go out in a short time, because the flame has used all of the oxygen in the jar and it can’t get any more. Without oxygen, there’s no way to convert the hydrocarbon molecules in the candle into energy (heat and light).

You can also watch oxygen combining with iron to make rust. First put a nail in a little vinegar for a day (to eat away the protective coating) and then put it in a jar of water and come back in a few days to see the rust. Just like with the candle, this change also lets off some loose electrons in the form of heat (but not as much as the candle).

Oxygen also combines with iron in food to make rust. Cut an apple into slices. Put one of the slices in a plastic bag and seal it tightly to keep out the oxygen. Leave the other slice on the table. In just a few minutes, the slice on the table turns brown – that’s rust too. 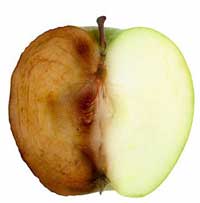 All animals (including people) also breathe in oxygen and breathe out carbon dioxide. Plants, on the other hand, breathe in carbon dioxide and breathe out oxygen. You can see this by putting your glass jar over a plant and waiting a few days. Then (leaving the glass jar on the plant) take a large plastic soda-pop bottle and cut a hole in the bottom. Light two candles on the table. Quickly remove the glass jar from the plant and place it over one of the candles. Put your plastic bottle over the other candle and breathe out into the top of the bottle a few times. The candle inside the plant jar should burn better than usual, because it gets more oxygen. The candle inside the jar you blew into should burn worse than usual, because it gets more carbon dioxide.

Bibliography and further reading about oxygen and atoms: