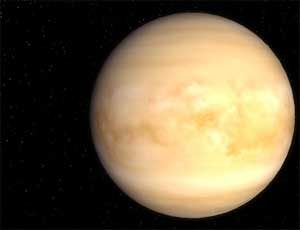 This is what the planet Venus looks like from space.

Venus is the second planet away from our Sun – Mercury is closer to the Sun, and then the Earth is a little farther from the Sun. Like the Earth, Venus probably formed about four and a half billion years ago, out of space dust in the same nebula. Venus is about the same size as Earth, so its gravity is about the same too. Also like Earth, Venus is mostly made out of melted iron in the center and then a thin crust of silica floating on top of that, and lighter molecules of carbon dioxide, nitrogen, and so on as an atmosphere. But there’s a lot more sulphur in Venus’ atmosphere than there is on Earth, so that on Venus instead of the clouds being made of water they are made of poisonous sulphuric acid (sulphur mixed with hydrogen and oxygen).

Venus spins very slowly, so a day on Venus is as long as 243 Earth days. Unlike most of the other planets, Venus spins clockwise, so the sun comes up in the West there. Because Venus is closer to the Sun, it goes around the Sun in a smaller circle, so Venus only takes 225 days to go around the Sun. On Venus, days are longer than years are! Because of the way Venus’ axis tilts, there are practically no seasons on Venus that might help cool down the surface.

Even though Venus is like Earth in many ways, it is not a place where people from Earth could live. In addition to having sulphuric acid rain, Venus also has an atmosphere that has much more pressure than ours does, because there is much more carbon dioxide in the air there than there is here on Earth. People standing on Venus would immediately be crushed to death by the air pressing down on them. And, because of the clouds of carbon dioxide that hold in the Sun’s heat, Venus is much hotter than Earth – about 860 degrees Fahrenheit (460 degrees Celsius). Venus is even hotter than Mercury, even though Mercury is closer to the Sun. Although Venus once had lots of water, like Earth, it’s so hot there that the water boiled away and broke down into oxygen and hydrogen, and then the hydrogen drained away into space.

Like Earth, Venus has a lot of active volcanoes that spit out molten lava. It’s likely that on the surface, there are tectonic plates that shift around just like the ones on Earth do. Probably nearly all the rock on Venus is igneous rock, because there’s not very much wind, practically no oxygen, and no water, and those are the main things that erode igneous rock so it can turn into sedimentary rock.