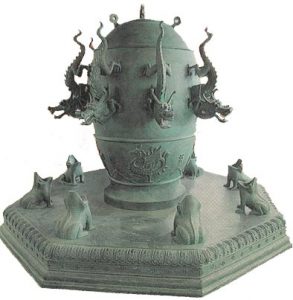 Earthquakes are a big problem in China, where there are many earthquakes, and often strong ones. Under the Han Dynasty, a man called Zhang Heng invented the first seismograph in the world – the first way to record an earthquake.

Zhang Heng’s seismograph was a bronze jar about three feet across, with eight small dragons perched on it. Each dragon had a ball balanced in his mouth. When there was an earthquake, the closest dragon’s mouth would open, letting the ball drop into the mouth of a waiting frog. This showed what direction the earthquake was coming from. Zhang Heng’s seismograph could tell what direction an earthquake was coming from up to 500 kilometers (310 miles) away.

Learn by Doing – Making a Seismograph