From Africa, they brought with them the knowledge of how to make Acheulean stone tools, and the use of fire. These early people kept on making Acheulean stone tools until about 200,000 years ago, when they began to make more efficient Mousterian tools instead. They probably also made baskets and straw mats.

History of baskets
What is straw?

When the earliest modern humans left Africa and walked to Europe, they arrived about 50,000 BC, bringing with them newer African scientific advances like tame dogs and leather clothing and painting, bows and arrows and fishing. Soon they were spinning rope and cords.

Yamnaya people migrating to Germany from Central Asia about 2000 BC brought with them many more new inventions, like horses and wagons, weaving, and the composite bow that you could use while you were riding your horse. They also brought domesticated pigs and cattle with them, and the use of bronze.

Where do horses come from?
Invention of the wheel
What is bronze?
History of weaving 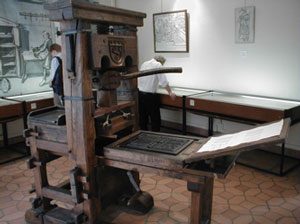 Reproduction of a press from Gutenberg’s time: Early European inventions

With the rise of the Roman Empire, the Romans (also Indo-Europeans) began to exchange ideas with their new subjects in West Asia and Egypt, and brought back new things to trade with the Germans to their north.

Invention of the bellows
Glass and glass-making
How do you make iron? 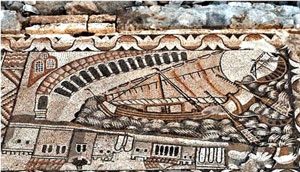 They brought wine, and wheel-made pottery, and iron tools. Under Roman rule, Cologne in northern Germany became a center of the new industry of glass-blowing. Roman ship-builders invented the lateen sail.

But it was not until after the fall of the Roman Empire, in the Middle Ages, that northern European scientists really began to make their own original contributions to the world. Chimneys helped to move smoke out of houses. Somebody invented the harrow, which allowed farmers to plow and plant heavier soils more efficiently. New types of ships allowed more efficient sailing.

Who invented paper?
Where does printing come from?
Medieval ships and sailing

The harrow encouraged a lot of people to move to northern Europe, and made Europeans richer, so they could educate and support more scientists. Thanks to the communications encouraged by the huge Mongol Empire, northern European scientists learned about paper, printing, and distillation in China and the Islamic Empire. Gunpowder and cannon also reached Europe from China, and the magnetic compass.

History of gunpowder
How does a compass work?

People in Germany were able to use these new ideas to invent fizzy beer, brandy, and eventually Gutenberg’s printing press with movable type.

Learn by doing: carve a poem into a linoleum block and use it to print copies
More about the printing press