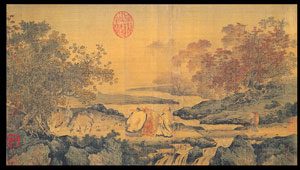 The first major philosopher who lived in China was Lao Tzu (if he really existed). He lived about 600 BC, under the Eastern Zhou dynasty. Lao Tzu founded the philosophy of Taoism. Taoism said that people should try to live in harmony with the universe, rather than fighting it. Instead of living by rigid rules and laws, people should try to work with the natural way of the world, the way water flows around rocks. In this way their lives would be easier and happier.

Not long after Lao Tzu began teaching Taoist ideas, another philosopher named Confucius came along to disagree with him. Confucius lived about 550 BC, also under the Eastern Zhou dynasty. He taught that people should recognize their responsibilities to the larger society, and work to uphold the laws and customs of their society. If everyone was a good citizen, the whole community would benefit and everyone would be happier.

You can see that these two ideas conflict with each other. Yet both Taoism and Confucianism were popular all over China for the next two thousand years, and they are still both popular today.

More than a thousand years later, in the 500s AD, Buddhist monks came to China from India. They brought a new Buddhist philosophy with them. Buddhists thought that people should concentrate on being good people and helping others, so they could stop being reincarnated and become one with God. In China, many Buddhists soon became Zen Buddhists. Zen Buddhists taught that you should not think or read too much, and instead you should become good by doing things and by meditating. Many people in China became Buddhists, including many Chinese emperors. But Chinese people kept on reading and thinking about Taoism and Confucianism, too.

Learn by doing: a Chinese scroll
More about Taoism
And about Confucius
More about the Eastern Zhou