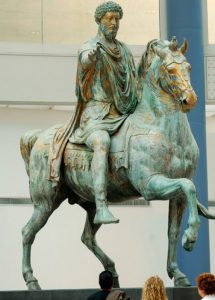 The Roman emperor Marcus Aurelius, riding on a horse

Who was Marcus Aurelius?

Marcus Aurelius was the last of the five good emperors. He came to the throne when Antoninus Pius died in 161 AD. Like Seneca and many other Romans, Marcus Aurelius believed in the Stoic philosophy. One of the first things he did as emperor was to insist on sharing power with his younger adopted brother, Lucius Verus.

What is Stoicism?
Roman philosophy
Earlier Roman emperors
All our ancient Rome articles

Lucius Verus seems to have been really not that interested in ruling, but it is always dangerous to have people around who want power and don’t have it, because they might try to get it by killing you. So Marcus Aurelius gave his brother enough power to keep him quiet. And very likely Lucius Verus was smart enough to make it clear that he was happy to be second-best if he could stay alive that way. 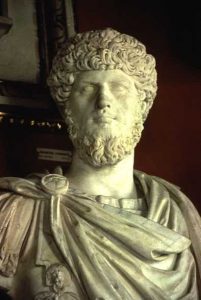 After the war, the Romans found that they had caught a serious disease from the Parthians. We aren’t sure what this plague was, but many people think it was smallpox. The Roman soldiers spread it all over the Empire as they came home, and many people died.

A war with Germanic people

But to the north, the Germanic people living in what is now Germany and Austria and Switzerland noticed that some of the Roman troops were gone, and there was a plague, and now THEY thought this would be a good time to attack.

Who were the Germanic people?

Marcus Aurelius spent most of the rest of his life fighting them or trying to make treaties with them. But just as he was finally winning, he died. He was 59 years old, and it was March of 180 AD. The Empire was much poorer than before, from the plague, and from having to pay so many soldiers.