Who were the Parthians? Iran – West Asian history

Grasslands of Central Asia – the steppe that the Parthians came from

Around 300 BC, some new people invaded West Asia from the north. These people were called the Parthians. Like the Scythians, and like the Persians when they first came to West Asia, the Parthians were nomadic people. They travelled around Central Asia with their horses and their cattle, and grazed the cattle and the horses on the great fields of grass there. Usually they lived well enough this way.

The Parthians immediately succeeded in taking over the middle part of Alexander’s empire (roughly modern Iran). This split the Greek empire in half, leaving the Greek colonies in Bactria (modern Afghanistan) isolated. They stayed there for about 200 years, gradually learning the culture of West Asia. They converted from their traditional polytheism to Zoroastrianism. 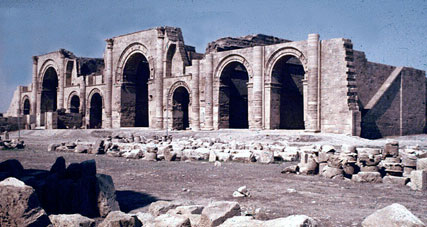 Parthian temple of Mithra, at Hatra (Iraq) 200 BC

A coin of the Parthian emperor Vologeses III

In 116 AD, the Roman emperor Trajan invaded the Parthian empire and conquered all the way to Babylon. The Parthians were not very strong at this time, because of civil wars, so they couldn’t fight back very well. In 117 AD, just a year later, Trajan’s successor Hadrian gave up most of the land that Trajan had conquered, but he made the Parthians pay the Romans a lot of money.

A new dynasty takes over: the Sassanians

By 161 AD, forty years later, the Parthians were united again under the strong king Vologeses III. When the Roman emperor Antoninus Pius died, the Parthians thought this would be a good chance to attack the Romans. So they did. After a big war, however, the Parthians lost again. This may be partly because of a great plague (a disease that many people got, and many people died of) that attacked them at this time. (We aren’t sure what the disease was, but it may have been smallpox). Then in the 220s AD, new rulers tossed out the last weak Parthian kings. These new rulers called themselves the Sassanians.

More about why they were always fighting
More about the Sassanids

The Hellenistic Near East
The Romans to the West
India to the East
Han Dynasty China
The Sassanids
The Coming of Islam
More about West Asia
Quatr.us home