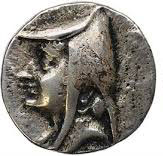 The first of the Parthian kings: Arsaces I

Arsaces I was the governor of Parthia (now northern Iran) in the Hellenistic Greek empire of Seleucia. About 250 BC, Arsaces revolted against Seleucus and started the Parthian Empire. Like the Persians before him, Arsaces followed the Zoroastrian faith. About four years later, Arsaces’ brother Tiridates seems to have taken over, or ruled with him, but nobody knows for sure. One of the brothers ruled until 211 BC.

Artabanus, Phriapatius, and Mithridates I

In 211 BC, Tiridates’ son Artabanus took power. Sometimes he also called himself Arsaces II. Two years later, the Seleucid king Antiochus III reconquered Parthia and forced Artabanus to accept Antiochus III’s rule over him. But Antiochus III was mostly busy fighting the Romans far away near the Mediterranean, and Artabanus was mostly free to rule Parthia however he wanted. When Artabanus died in 185 BC, his son Phriapatius took power. By this time, Antiochus III had died, and his son Antiochus IV was busy fighting the Maccabees. Phriapatius died after fifteen years, in 170, and his sons ruled after him. The second son, Mithridates, expanded his kingdom south to Herat (in modern Afghanistan) and seized control of the road that carried trade in silk, glass, carpets, horses, and steel across Central Asia. With the taxes they charged on this trade, the Parthians got a lot richer, while the Seleucids got a lot poorer.

Mithridates died in 132 BC, when he was not even forty. His wife Ri’nu took power, as regent for their son Phraates, in keeping with the Central Asian tradition of powerful women. Two years later, Antiochus VII attacked. Ri’nu rejected his terms for peace, and in the winter of 129, with the support of local people, her generals counter-attacked successfully. Her son Phraates married the daughter of the next Seleucid ruler, Demetrius II, to help seal the peace. After this, the young man seems to have fought his own battles, because he was killed fighting off a Yuezhi invasion from the east later that year. Phraates’ uncles, Phriapatius’ younger sons Bacasis and Artabanus, followed him (since he was too young to have sons), but they also died fighting the Yuezhi. (Well, at least Artabanus did; nobody knows what Bacasis died of.) 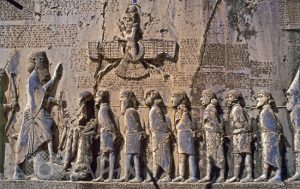 The Behistun Frieze, in Iran, shows the Parthian king Mithridates II accepting tribute from his satraps (about 90 BC).

When Artabanus died, his young son Arsaces X inherited power (maybe under a regency?) but soon died. His uncle, yet another of Phriapatius’ sons, ruled as Mithridates II, the greatest of the Parthian kings. To the east, Mithridates II reached an agreement with the Yuezhi. In 120 BC, he negotiated trade agreements with the Chinese Han Dynasty emperors that expanded the Silk Road. To the west, Mithridates II expanded his kingdom to include all of Iran and most of Iraq, all the way west to the Euphrates river. He reorganized his kingdom and abolished the use of cuneiform – now everyone had to use the alphabet for official records. He influenced politics in Armenia, and negotiated with the Roman general Sulla in 96 BC.

As Mithridates II got old, there were serious rebellions, and the Parthian Empire nearly fell apart. Mithridates II died in 91 BC, and he tried to leave his kingdom to his son Gotarzes, but, as in the Roman Republic at the same time, there were a lot of people fighting for power. The Parthian Empire had civil wars until the Scythians settled them in 77 BC by putting a different family into power. Phraates III, who got power when his father died in 70 BC, was the first important ruler from this new family. Phraates III rebuilt his power in the west, negotiating with the Roman general Pompey and defeating the Armenian king too. But about 57 BC, Phraates’ sons murdered him! Young Or0des and Mithridates seized power for themselves. While they were ruling, in 53 BC, the Parthians used their heavy armed cavalry to defeat the Roman general Crassus‘ invading army. They killed Crassus, and so kept control of Iraq.

Musa of Parthia and her son and co-ruler on a silver coin.

But in 37 BC, Orodes’ son Phraates IV killed him in his turn and became king. Phraates IV defeated another Roman invasion by Mark Anthony. He then faced another civil war, and was only saved by the intervention of his great-grandfather’s Scythian allies. After Mark Anthony was killed, Phraates IV ended up making a lasting peace treaty with Augustus. Augustus gave Phraates an Italian woman, Musa, and Phraates married her. But in 2 BC, Musa and her son killed Phraates IV. Mother and son ruled Parthia together for six years, until they were killed in another civil war.