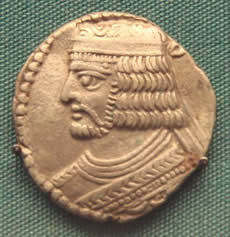 Vologases I, the king of the Parthian Empire

Artabanus III and his son Vardanes

The murder of Queen Musa and her son in 4 AD ended up with another civil war in the Parthian Empire, which only ended in 10 AD when a cousin, Artabanus III, became the Parthian king. Still the Romans supported a different candidate until the Roman emperor Tiberius gave it up about 18 AD. There was more fighting, and even after Artabanus died in 38, the civil war went on under his son Vardanes. Vardanes seems to have gotten support from the Yuezhi or the Sogdians, while his brother Gotarzes got support from the Dahae (they may have been Scythians). Gotarzes ruled alone after Vardanes died about 47 AD, and then in 51 Gotarzes died and was succeeded first by his uncle and then by his cousin Vologases.

Vologases and his brother Tiridates

Vologases (whose mother was Greek) immediately made it clear that he planned to rebuilt Parthian power. He emphasized the Parthian connection to the earlier Persian Empire. Then he invaded Armenia and put his brother Tiridates in charge there. This broke an agreement the Parthians had made to let the Romans control Armenia. In 55 AD, the Roman empress Agrippina sent an army under her general Corbulo that succeeded (in 58 AD) in getting Armenia back. Vologases was distracted by a revolt at the very core of the Parthian kingdom, in northern Iran, and after he had dealt with that, he ended up with a compromise leaving Tiridates in charge of Armenia, but under Roman control. Tiridates even visited the Roman emperor Nero in Rome, and Vologases sent troops to help Vespasian become emperor. But when the Alans invaded and looted Armenia and Parthia, Vespasian failed to send help in return. 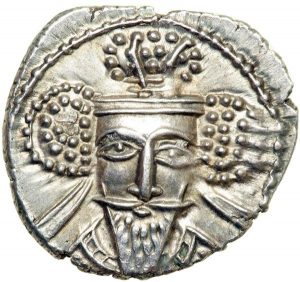 A silver coin of Vologases V, the Parthian king

Vologases died in 78 AD, and the Parthian Empire ended up being split between Vologases’ younger brother, Pacorus II, and Vologases’ grandson, Vologases III. Pacorus basically got Iraq while Vologases got Iran. Even so, Pacorus encouraged Silk Road trade, even sending ambassadors to the Han Dynasty emperor in China in 101 AD.

Vologases IV once again tried to take over Armenia, and once again the Romans invaded – now under Marcus Aurelius – and took it back in 165. Then the Romans burned and destroyed cities in Iraq, and even into Iran. They took over western Iraq for the Roman Empire. Vologases’ son, Vologases V, fought another war with the Roman emperor Septimius Severus, and the Romans took over even more of Iraq about 200 AD.

The end of the Arsacid Dynasty 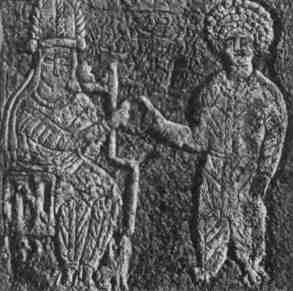 The last Arsacid king of the Parthian Empire, Artabanus V, meets with his satrap Khwasak at Susa.

But while they were dealing with the Romans, another man, Ardashir, was getting more and more power in Iran. The Parthians fought three battles with Ardashir, and lost all of them – and that ended the Arsacid dynasty. So in 224 AD, Ardashir started the new Sassanian dynasty of the Parthian Empire.

The Sassanians
More about West Asia in general
Quatr.us home