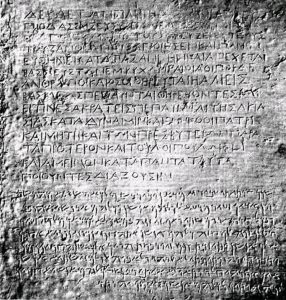 This inscription from Kandahar, in Afghanistan, has Greek writing at the top, translated into the Aramaic alphabet at the bottom. The Mauryan Indian king Ashoka put it up about 258 BC.

Starting to use the alphabet

When the Assyrian Empire collapsed in the 600s BC, the short-lived Babylonian Empire also used cuneiform writing. But when the Persians took over West Asia in 539 BC, they used cuneiform only for official inscriptions. For everyday writing they used Aramaic. That’s a Semitic language, the language Jesus spoke. And they used the Aramaic alphabet. The Persians also brought with them old Indo-European stories like the story of Sohrab and Rustem. These stories now became part of West Asian literature.

Neo-Babylonian Empire
The Persian Empire
What was cuneiform?
Invention of the alphabet
All our West Asia articles

When Alexander and the Greeks took over West Asia in 331 BC, his government used the Greek alphabet in addition to Aramaic. The Hellenistic was a time where West Asian people had a lot of choices about how to write. Religious officials still even used cuneiform for religious occasions until the time of Jesus. The last cuneiform inscription is from 75 AD.

Who was Alexander?
Hellenistic kingdoms
The Greek alphabet

The Romans and the Parthians 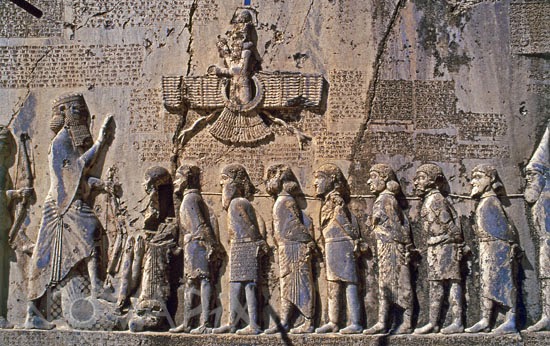 The Behistun Frieze, in Iran, shows the Parthian king Mithridates II accepting tribute from his satraps (about 90 BC).

Sohrab and Rustem
Vis and Ramin
Who were the Parthians?

Islam and the Arabic alphabet

Then when West Asia was conquered by the Arabs in the late 600s AD, the Arabic alphabet gradually replaced the earlier ones throughout the area. This is the alphabet still in use all over West Asia today, except in Israel, where people use Hebrew. People wrote a lot of literature during the Islamic period: you can read about it in our article on Arabic literature.