What is chlorine? – Atoms – Chemistry 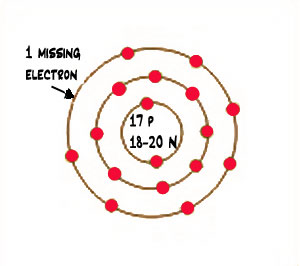 Diagram of a chlorine atom

What is a chlorine atom?

Chlorine is an atom that has 17 protons and usually either 18 or 20 neutrons in its nucleus and 17 electrons circling around its nucleus.

What is an atom?
Projects with chlorine
All our chemistry articles

Where does chlorine come from?

Chlorine atoms, like other light atoms such as oxygen, form inside stars and scatter into space when the star becomes a supernova.

What’s a supernova?
More about stars
And space
All our physics articles

Video shows what happens when you mix chlorine and sodium.

How does chlorine make salt?

Because of this missing electron, chlorine atoms join up easily with any atom that has one extra electron. Sodium is the most common example of this, and both in space and on earth sodium and chlorine atoms often join together (with the help of water) – that makes molecules of salt.

What is sodium?
More about salt

What is chlorine bleach?

Chlorine also mixes easily with water, forming an acid molecule made of hydrogen, oxygen, and chlorine atoms. This is the main ingredient of bleach, and we use it to kill bacteria in water, to make it safe to swim in and to drink.

What are bacteria?
More about oxygen
Lipid membranes

Chlorinated water kills bacteria because it breaks down into chlorine and oxygen. Both the chlorine and the oxygen need more electrons and join easily with other atoms. When they hit a bacterium, they join up with some of the atoms of the lipid membrane of the bacterium cell. Then the lipid membrane leaks. It can’t keep the cytoplasm inside the cell anymore, and the cell dies.

Bibliography and further reading about atoms and chemistry: