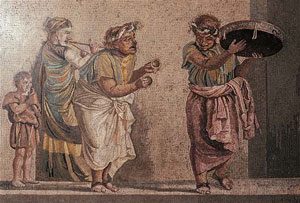 Roman music came from earlier Etruscan, Carthaginian, and Greek music. As with earlier music, nobody knows what Roman music sounded like because there was no way to record it. Rich people owned musicians as slaves, and these musicians played at dinner parties or for entertainment in the evenings. Theater performances had musical accompaniment, and musicians also played in small theaters called odea. Other musicians played for tips in taverns, or on the street, as many musicians do today. 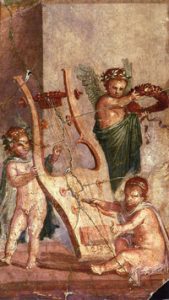 Roman musicians plucked and strummed stringed instruments. At first they played lyres, which have strings over a sound-box. Later the lyre developed into the kithara, which is where we get our word “guitar”. Like a guitar, the kithara had string over a soundbox, with the strings extending longer than the soundbox, but there weren’t any frets. 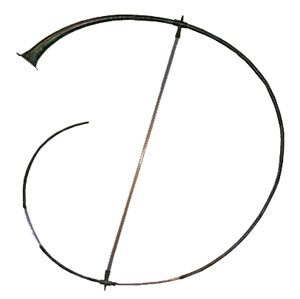 Roman musicians also blew into wooden pipes, using a reed to make the sound louder, like an oboe or a clarinet. They also used drums and castanets and rattles. There were choirs, including children’s choirs, which often sang at religious ceremonies. And there were bands that played in the amphitheater before and after gladiatorial games.

Roman musicians used bronze horns more than earlier musicians, as a marching band for the Roman army. The Romans played both a straight horn, called a tuba, and a curved horn, called a cornu.

Musicians playing at gladiatorial games, from a floor mosaic in Tripoli (Libya)