How to make a Greek lyre – Ancient Greece project 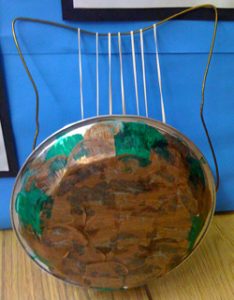 Greek lyre, made by 6th graders at Laurelhurst School, Portland

What was a lyre?

One of the favorite instruments of ancient Greek musicians was the lyre, which was a very early form of guitar. Like a guitar, a lyre had strings, and you plucked them to make the sound. Also like a guitar, a lyre had a soundbox to make the sound louder. But a guitar has a neck, so you can press down on the strings to change the note. Lyres didn’t have that, so there were fewer notes available for Greek musicians to play. 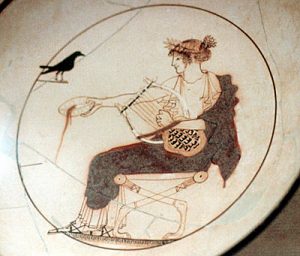 Make your own lyre

You can make a lyre like this one with a coat hanger, rubber bands (or yarn) and a metal bowl. Really the strings should run over the top of the bowl, so that the bowl will work as a resonator to make the music sound louder when you pluck the strings. This student painted the inside of the bowl to look like a turtle shell, as in the story of Hermes making the first lyre out of a turtle shell. Find out more about Greek music.