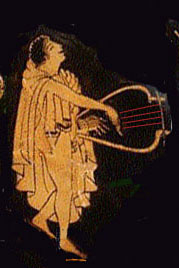 Some people have been trying to figure out what ancient Greek music might have sounded like.  But most of what we know about Greek music comes from pictures like this one, from black-figure and red-figure vases. The pictures show us what the instruments looked like, but we can’t hear what they sounded like.

However, Greek musicians did try to write down songs, and we have a few of them. We don’t know if we understand the way they wrote music down, but people have tried to figure it out.

Here is a song played on a lyre. This is a version of the Song of Seikilos, which is the oldest complete piece of music that we have. It comes from the tombstone of a woman, and Seikilos was the man who put up her tombstone.

Again, nobody knows for sure whether this is what ancient Greek music really sounded like. Greek people had no way to record music. They did try some ways to write music down, but nobody today understands exactly what they meant by their notation.

Did this article answer your questions about what ancient Greek music sounded like? Let us know in the comments!