Who wrote the Libation Bearers?

This is the second of a cycle of three plays written by the Greek playwright Aeschylus. In Greek, the play is the Choephori, which means the Libation Bearers – the people who pour out offerings on a grave. In this case, Agamemnon’s grave.

Who was Agamemnon?
The Eumenides
Who is Aeschylus?
More Greek literature
All our ancient Greece articles

Some time has passed since the murder of Agamemnon. Agamemnon’s children, Orestes and Electra, have grown up with their mother Clytemnestra and their stepfather Aegisthus. But they are very unhappy, because they know their mother murdered their father and she totally got away with it.

Why was Clytemnestra so mad?
The curse of the Atreides

Should Orestes kill his mother?

Orestes has gone away, fearing that his mother might murder him too. But he comes back when he is grown up, and struggles with the decision: Which is worse – to let his father’s murder go unpunished, or to kill his own mother? 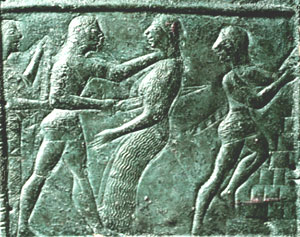 Libation Bearers: Orestes kills his mother while Electra looks on and Aegisthus runs away. Bronze, ca. 570 BC, Olympia, Greece

Does he do the right thing?

In the end, after a long discussion with his sister Electra, Orestes decides that he has to avenge his father’s murder, even though it means killing his mother. So Orestes kills Clytemnestra and Aegisthus.

The Libation Bearers and Greek women

It’s hard to know what Aeschylus had in mind, but, reading this play today, it might seem like Clytemnestra is hardly the villain here. Her husband murdered her daughter in order to go to Troy and recapture his brother’s wife for him. There’s a lot of emphasis on controlling women, and you could see Clytemnestra as standing up for herself.

Remember, this is a tragedy – that’s the genre. The ending is supposed to be tragic, not triumphant. If we assume that Orestes is right, where is the tragedy?

More about Orestes: the Eumenides.

Bibliography and further reading about Aeschylus: