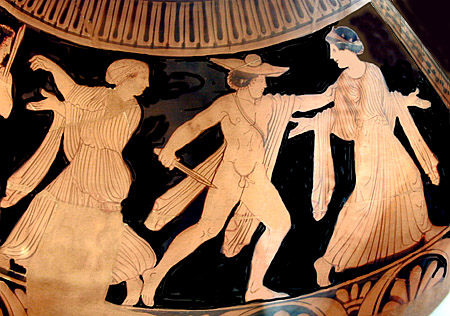 Third in a trilogy

The Eumenides is the third of a cycle of three plays written by the Greek playwright Aeschylus.

Who was Aeschylus?
Agamemnon
Curse of Atreus
Greek literature
All our ancient Greece articles

When Orestes kills his mother, Clytemnestra, the Furies (the Eumenides: you-MEN-ih-dees) attack him because he has done such a terrible thing. You might say he begins to go crazy with the horror of what he has done.

Athena says to hold a trial

But the goddess Athena steps in and says that the Furies will not decide this case. Instead, it will be tried in a court of law, and the men of Athens will be the jury.

The court meets, and each side presents their arguments: was it better to let his father go unavenged, or to kill his mother? The god Apollo speaks to defend Orestes, and the Furies speak against him. 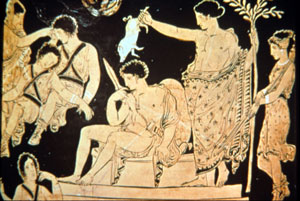 Orestes being purified by Apollo (Eumenides Painter, about 380 BC)

The jury deadlocks, half on each side, but Athena casts the deciding vote that lets Orestes go free. Apollo performs the ceremony that cleans Orestes and makes him able to rejoin society.

However, in the future, the relatives of murder victims will go to court, and not avenge crimes on their own.

Learn by doing: hold your own jury trial for Orestes. What would you decide?
More Greek plays: Sophocles

Bibliography and further reading about the Eumenides: