Who are the Furies? Greek mythology 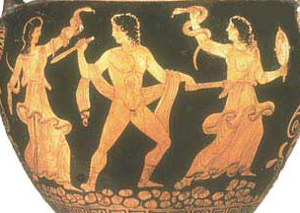 In Greek mythology, the Furies were terrifying female spirits of the underworld who frightened men when they had done something bad.

Greek men called them the Erinyes, “the angry ones”. They were like the voice of your conscience, or the anger of dead people.

Where did the Furies come from?

Like Aphrodite, the Erinyes were born out of the blood when Kronos wounded his father Ouranos. You could say that Aphrodite and the Erinyes are two sides of the same coin – love and hate. Like everything the Greeks associated with women, the Earth and the underworld, the Furies carried snakes.

Who is Aphrodite?
Who was Kronos?
Women in ancient Greece

Greek men were so scared of the Furies that they usually didn’t even call them “the angry ones”, but instead called them the Eumenides, “the nice ones,” hoping that this would calm the spirits down, like how people say, “Nice dog” as the dog is growling at them.

A Greek play with furies in it

The most famous appearance of the Furies in Greek myth is in the story of Orestes, who was pursued by the Furies after he murdered his mother.

Learn by doing: Greek gods bingo
More about the Eumenides

Bibliography and further reading about the Greek gods: