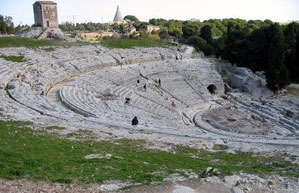 Places Damon and Pythias might have been: The Greek theater at Syracuse in Sicily

According to the Greek story, Damon and Pythias grew up in Sicily, and they were always best friends.

One day when the two of them were visiting the city of Syracuse Pythias said some things against the king of Syracuse, and the tyrant got very angry. The king had Pythias arrested and he was going to kill Pythias (PIH-thee-ahs).

(The king was really a tyrant.)
A game about tyrants

Pythias said, “Couldn’t I just go home and tell my family what happened and get ready before I am killed?” But the king said, “Oh sure, like you would ever come back again to be killed.” Damon said, “I will stay with you while Pythias goes home to say goodbye. If he doesn’t come back, you can kill me instead.”

The king couldn’t believe anyone would trust their friend so much. He thought this was really dumb. But he agreed to let Pythias go. He was supposed to be back in one month. If he wasn’t back by the end of the month, the king would kill Damon instead.

Pythias went home, and said goodbye to his family, and left to come back to the city and be killed. He wouldn’t leave Damon to be killed! But on the way back, his ship was attacked by pirates. Pythias tried to explain to the pirates that it was really important for him to get to Sicily, but they just threw him overboard.

Greek ships and sailing
Did Greek people know how to swim?

Pythias swam to shore, but then he didn’t have any money or a horse or any way of getting back to Damon. He was so worried that Damon would be killed! He started to run as fast as he could towards the king’s palace.

Meanwhile the king was telling Damon, “See! Pythias has abandoned you. I told you he’d never come back.” But Damon knew his friend would never leave him to be killed. Damon knew Pythias would come back to be killed himself. 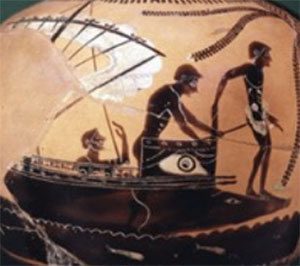 Like Damon and Pythias: A Greek ship with a man standing on deck

On the last day, the king had Damon tied up and took him outside into the courtyard of the palace to be killed. But Damon was still not worried. He knew Pythias would come. And sure enough, just as Damon was about to be killed, Pythias came running in.

Pythias was filthy dirty and his clothes were all in rags from swimming in the ocean. And he had lost his shoes and had to run barefoot the whole way, and his feet were all bloody. But he was so happy to have come on time! He cried out, “See! I have come back. Let Damon go! I am ready to be killed now.” And he put his own head on the block.

But the king was so impressed by this great friendship that he did not kill Pythias after all. Instead, he kept both the friends at his court so they could give him good advice. It’s a great story about good friends, but it’s also a story about solidarity: standing together to resist a tyrant – a bad ruler.

(We know this fictional story from Cicero, and from a book by a Roman named Valerius Maximus, called De Amicitiae Vinculo (On the Chains of Friendship), from about 25 AD)

Learn by doing: write about something you did for a friend
More stories from ancient Greece

Bibliography and further reading about Damon and Pythias: